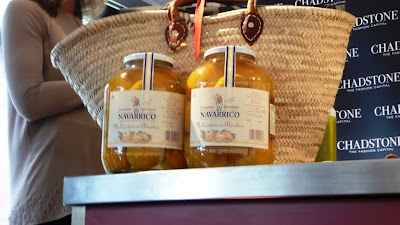 (The lucky draw prize for the day)

After the crazy post from yesterday… the Boy reckon I should have split it up into 2 separate posts… could have, should have, would have… meh 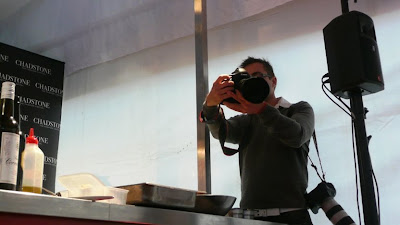 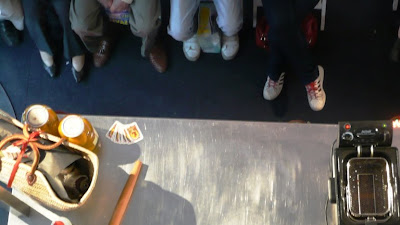 Me! Front ROW!… Dangling feet, with a slight chance of flying oil and other condiments when Frank cooks and waves his hands and spatulas’ around. 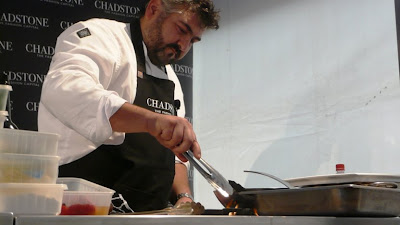 When we first entered the scene (The second time round), Frank was heating up some coal over the stove and chucking them back into a big metal tin to ignite each other. 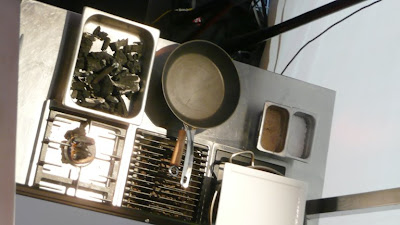 This dish, is called Hongos A La Parrilla (Grilled Mushrooms) 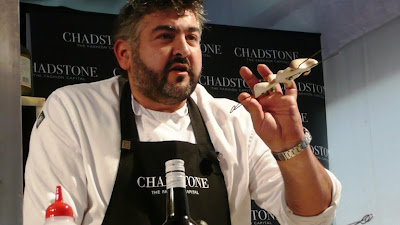 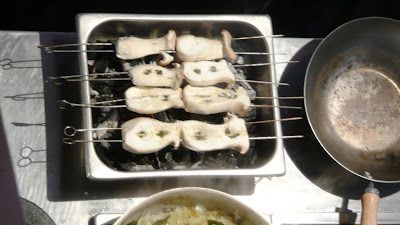 Slice the mushrooms in half, then make 3 incisions in the stalks. Push a slice of garlic and some thyme leaves into each incision. 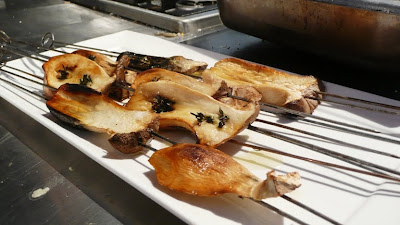 Next up, Sopa de Lentejas (Lentil soup with chorizo and black pudding). 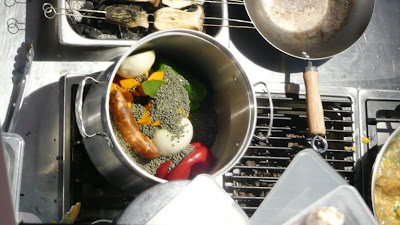 As the previous style of cooking, Frank’s way, he chucked all the ingredients into a large pressure cooker (for the real recipe, he reccommends a cooking pot), add 3.5 litres of tap water and all ingredients except for salt, vinegar and black pudding (which he didn’t use when showing us) 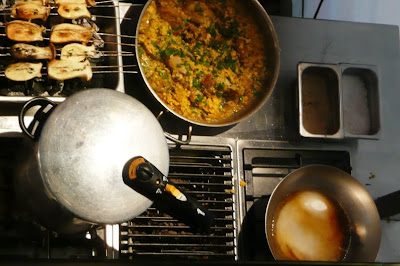 After 55 minutes, add the morcilla and cook for a further 5 minutes. 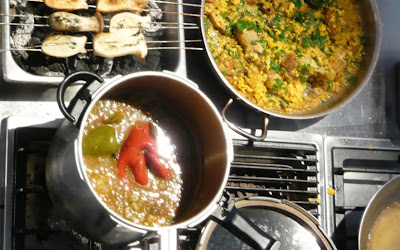 Frank and his assistant taking turns at blending. 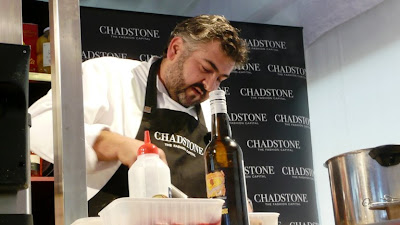 To serve, remove the sausages (slice them), and remove all other whole vegetables, remove from skin and blend them together. Add them back into the soup and mix around. 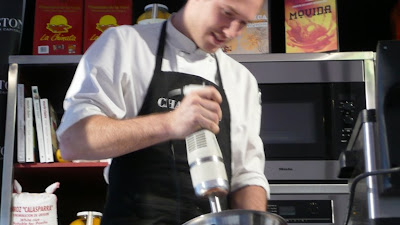 Ladle into a bowl, drizzle with a few drops of sherry vinegar and arrange the sausages on the top of the soup. 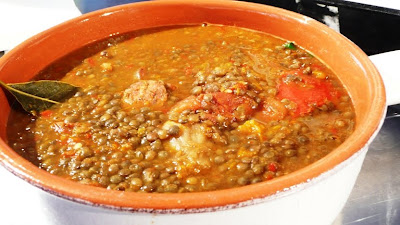 Empanadillas (Little shrry pastries filled with tuna and piquillo peppers), pastry is made by mixing 1 cup of plain flour, 1 cup of self raising flour, pinch of salt, 120ml olive oil,and 150ml dry fino sherry. Briefly knead for a minute or so being careful to not overwork the pastry. 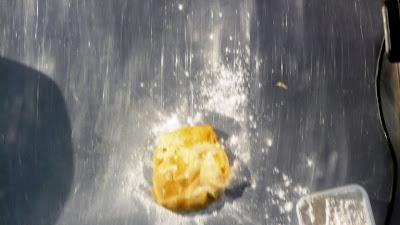 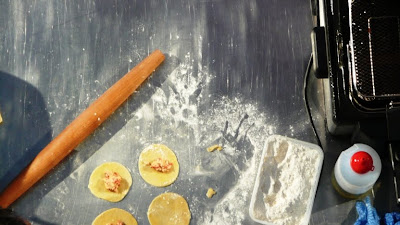 In the middle of each round place a tablespoon of filling, brush each edge lightly with eggwash, fold over pastry and using a fork crimple the edge of each emapanadilla to secure the seal 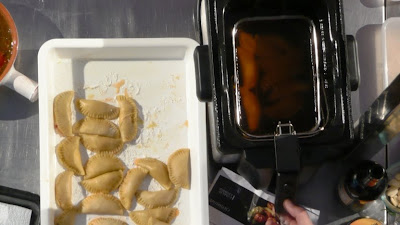 I didn’t get to take a picture of the finished Empanadillas as we ran out of time, and everyone was grabbing them as they were coming out of the deep fryer. But I can tell you that the pastry was the fluffiest flaky pastry I’ve ever had and the tuna was just melt in the mouth fantastic! 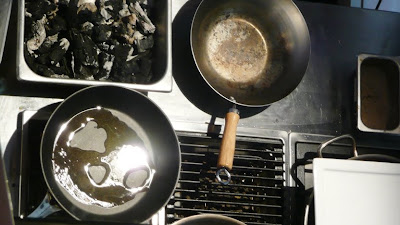 Heat olive oil in a large heavy-based pan and add chicken, season with salt, and cook until lightly brown. 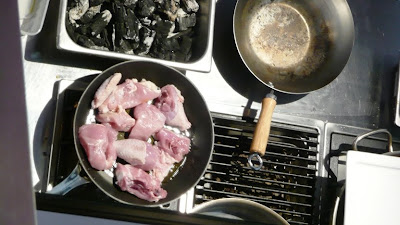 Add the onions (3 finely diced), bay leaves (4) and 5 sliced garlic cloves and saute for until the onions are soften. Add the saffron and cook, stirring, for 1 minute. 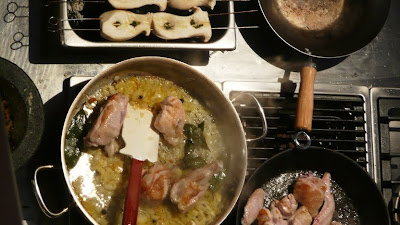 Cover and cook for 1 hour covered in the oven at 180degrees. Season with salt if necessary. 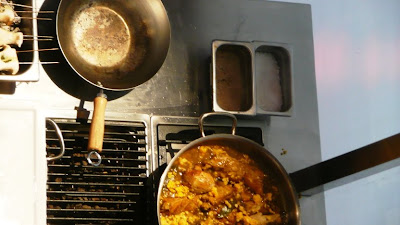 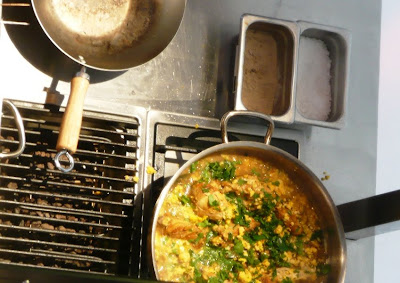 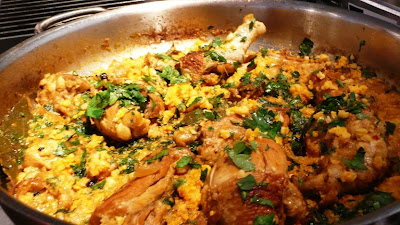 The last dish, a dessert and the Boy’s favourite dish (he took 3 separate handfuls and was extremely delighted with it!) 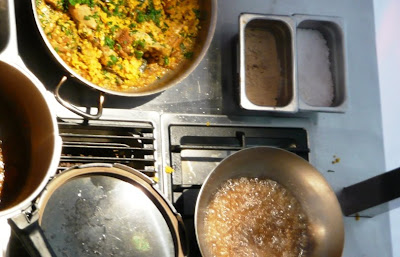 Put 1 cup of almonds and sugar together with a cup of water and cook over a medium high heat until the mixture begins to thicken and caramelize. Stir continuously uuntil the sugar begins to crystalise. 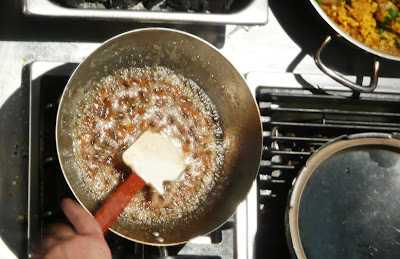 Remove from heat and spread on a lightly oiled tray. Allow to cool completely and then break up with your hands or rolling pin if neccesary. 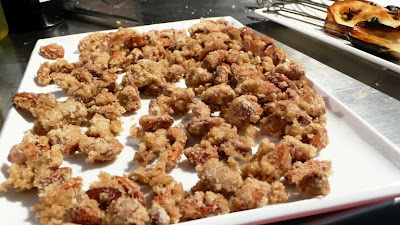 And that was it. I asked Frank how often does MoVida change their menu, and he replied, “Very rarely”. “The new MoVida at Bourke Street (the old NAB building’s courtyard) has a bigger menu”, was what he added further when I asked what was to be expected from the new venue =)