The Best of 2010 for the Chronicles of Ms I-Hua

It’s that time of the year (or end of the year, I might say!)… I can hardly believe it… 2010 has come and gone so quickly, faster than you can say supercalifragilisticexpialidocious!
At the start of 2010, the Boy, Madam Mummy, Big Sis and I had just returned from our glorious Egypt trip! We went, we ate and we conquered the knowledge and history of the ancient Egyptian past. You can read all about it here (9 days split into 13 parts)…
The Boy and Sis had to return to the land down under as their holiday ended, wheares I, happily unemployed (I had finished my contract in November and wanted some time off work), and Madam Mummy decided to take on the streets of Bangkok. We had an amazingly fabulous time… just the both of us, shopping and eating up a storm!!!
And then along came Easter, Big Sis and Big Bro came down for a visit! And it couldn’t have been a visit if it wasn’t an eating fest! Together we traipsed around Daylesford for the weekend at the Lavendula Farm, visiting Chowder House and the Lake House!!

﻿From Duck Duck Goose to Spice Temple, we went to them and filled our bellies with much love!

We found our favourite Breakfast Spot – Pope Joan! Our favourite chill out place – Il Fornaio (which has now sadly closed)…

I found my favourite macaron! Kaya Toast from Luxbite..!
﻿ 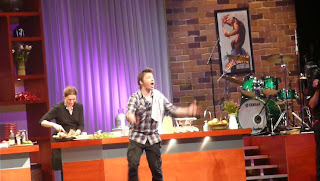 We ate like crazy at the Good Food & Wine Show in June (and saw Manu Feidel, Matt Moran, Gary Mehigan and George Colambaris) and the Taste of Melbourne in August!!

We attended a few concerts, some of which I even wrote about(there’s more to come, isn’t it glorious with a lagging blog??!)… Lady GaGa…Paramore… there’s a few more.. I promise, they’re coming up!!! (Jack Johnson, Linkin Park).. and a few more which I won’t bother just because it’s been too long a gap… Katy Perry, Powderfinger (which was awesome!), Jason Derulo, and a few more.. I’m getting old and my memory fails me all the time now…

﻿Musicals! Wicked! West Side Story and the fabulous Mary Poppins!
And of course, the Boy and I cooked up some spectacular dishes!

With our favourite being the Halloween Special!

So shout out “Cheers!” to a wonderful year, let bygones be bygones, smile and seize the New Year! Don’t waste it and have an awesome busy year!!!
I can’t wait for next years events and highlights!! Bring on Vue De Monde, Grossi, Loam, Quay, Provenance! We’re coming!!! So hang on tight!
Happy New Year!! *cue fireworks*