The best thing about being friends with food bloggers is that you’ll never have to doubt the quality of the food at a party.

All you need to do is think of a theme, make it a pot-luck gathering, call a few friends and voila! You’ve got yourself an awesome rocking party.

First up, we have High Tea Party at Kaz’s where the usual suspects went all out to make it an extravagant affair! 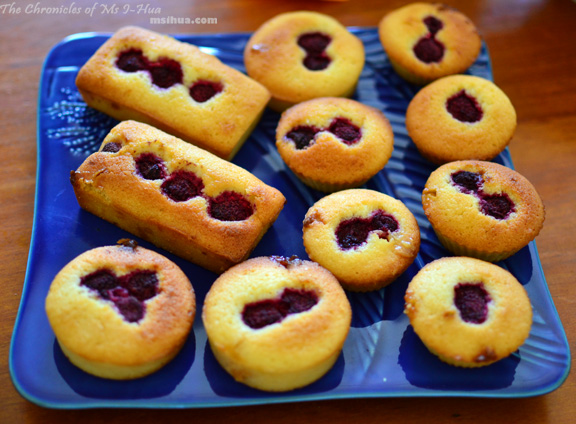 As most of you know, I’m a firm believer of afternoon teas (so much so that my friends threw me separate Hens day afternoon tea parties!). LOVE HIGH TEAS! 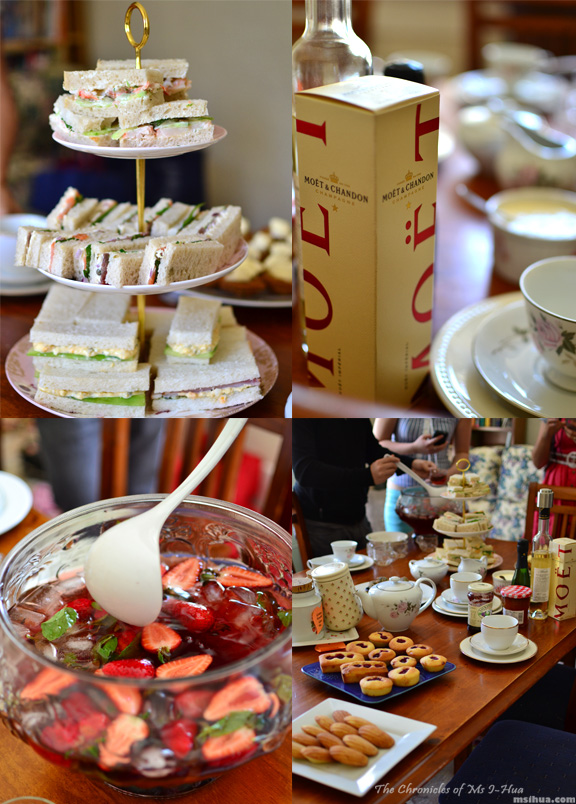 What’s an afternoon tea without some bubbles on the side? So we had some Moet to go round (courtesy of Taz) 🙂 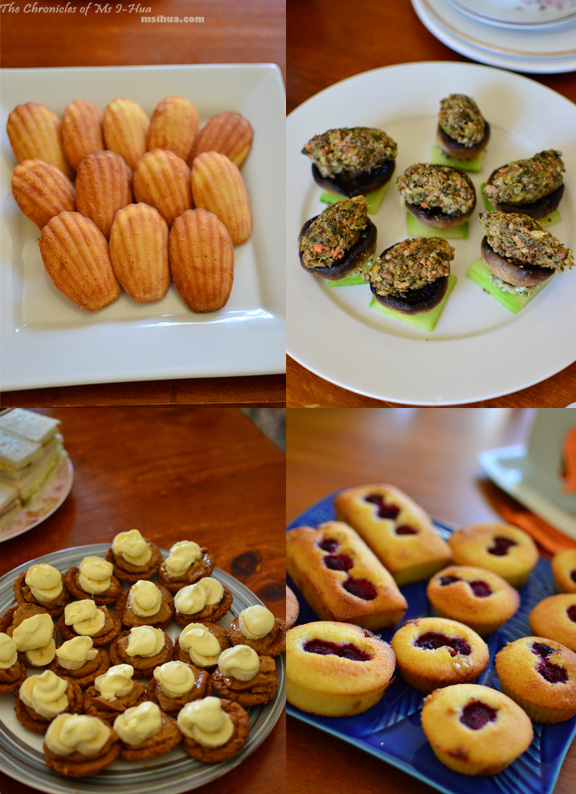 Other food items that were brought to the tea party (no Mad Hatter here) were Madeleines, Stuffed Mushrooms and Banoffee Tarts. Taz made Friands as well! We were his instant friends (more so than before :P)

After all that, we decided a walk would do us some good and promptly walked to the nearby temple (also known as Leo’s Fine Foods) where we managed to get some ice-cream & grocery shopping done!

The second party which I would like to share with you was put together 3 months in advance (that’s how bad we all are in terms of our social activities). It was during one Christmas get together (at Kaz’s house), that the group of us thought it’d be really funny to do a blind ice-cream tasting test.

One thing led to another and Adrian really wanted to have one (albeit he wanted us to really blindfold ourselves to taste the ice-creams :P). 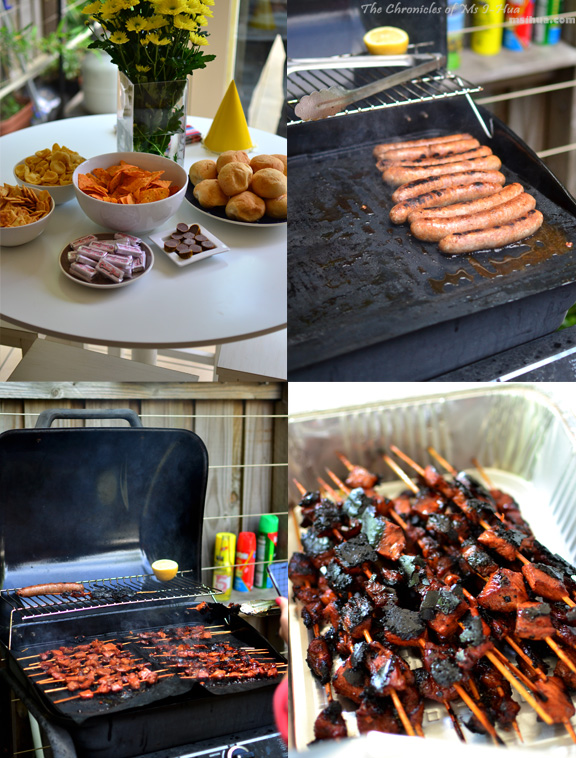 The best thing about having a fun blind tasting ice-cream party at a fellow food blogger’s house? We had one at a super successful author’s house. If you didn’t know already, Adrian is the lovable and humble author of “What the Heck is Filipino Food?“. Not only has he won the Best Asian Cuisine Book for Australia at the 18th Annual Gourmand World Cookbook Awards (which means he can write), he also serves up an awesome party (he did it all!).

There were BBQ Pork skewers and snags which the boys took to with glee outside with beers in their hands. 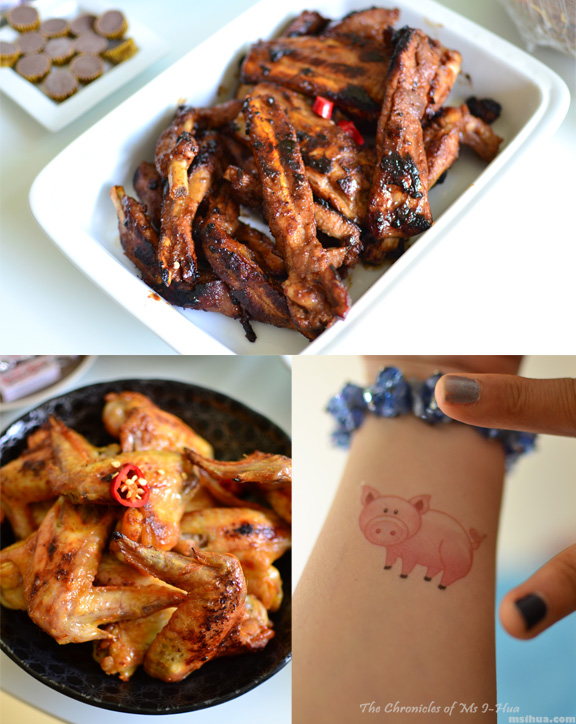 Adrian also cooked up some mighty fine Pork Ribs and Oven Baked Chicken *slurpilicious*. If you want the recipe’s, you know where to find ’em 🙂

We also each got a goodie bag which had piggy tattoos in them, so we all promptly got our pig on! 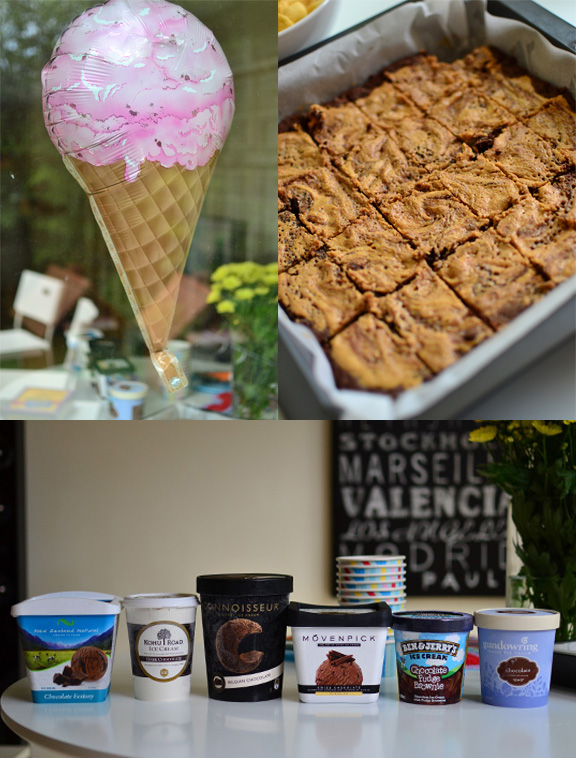 Let’s not forget the whole point of this party! The Ice-Cream blind tasting test. The criteria were simple.

a.) It had to be chocolate ice-cream
b.) It couldn’t have any other discernible flavours in the ice-cream (i.e. no peanut butter, orange, mint, etc…)

It was really funny and we couldn’t stop giggling, as we all took the blind tasting so seriously (no blindfolds!). We each took notes, and we ranked each ice-cream based on taste, quality and texture.

We won’t post the winner here, so you’ll have to do your own ice cream party!

But if you really want to know what we thought of each of the ice-creams and how we ranked them, you can always hop over to my beautiful DD’s blog which she summarised: