The team that brought you Middle Fish is now back with a new restaurant in Melbourne CBD. Nestled in between what is becoming the next little Korean BBQ laneway sits Mr Nice Guy fresh with his Singha Umbrellas 🙂

Pla Liamthong and David Holtum tackle the suits with this new venture, offering more up market dishes than the more rustic fare available at Middle Fish. 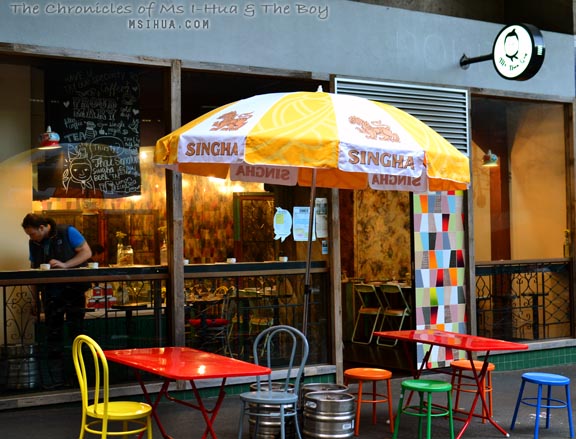 Jovial and bubbly as always, Pla greeted each guest that attended the dinner with a big hug and a big welcome. She’s so cute, I want to take her home. I was told she wasn’t mine to keep 😛

We were offered Thai Milk Tea and Thai Coffee to get our palates going before the night of eating started. 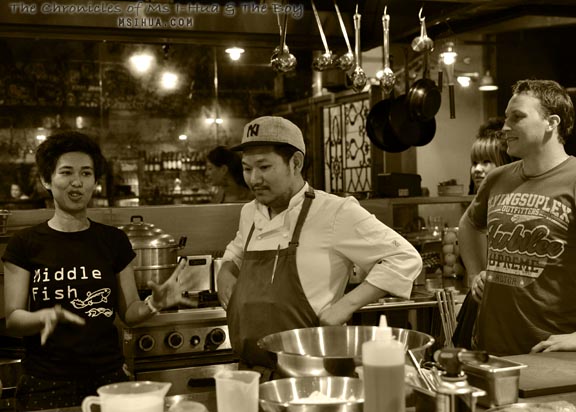 As a group, before dinner, we were treated to a masterclass.Head chef Will Tang (training in the VdM group) was quick and efficient in the kitchen as he showed us the “behind-the-scenes” of the preparation that goes into the menu. Aided by his team (the one with the hat and Sandra of the som tam station), he walked us through the brining process and marination of the meats. 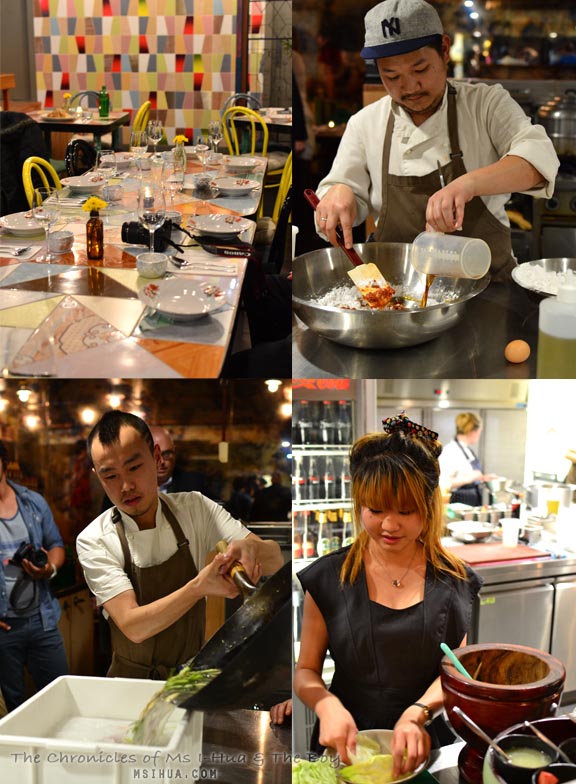 We also got to watch how fish cakes were made (Mr Nice Guy style) and som tam was prepared and smashed to success. The som tam served here is quite unlike the norm. Pla mentioned that with Mr Nice Guy, they were opting for a different version of som tam which was less spicy and instead more sweet and sour in flavour.

The som tum was indeed of the none spicy persuasion and I must say wasn’t what I would have preferred. I’m all about fiery hot combusting Som Tums. Taste wise it was still a well balanced salad.

The winning item out of all the starters were definitely those lovely Thai Fish Cakes. The hint of kaffir lime and chilli was balanced very well with the fish. 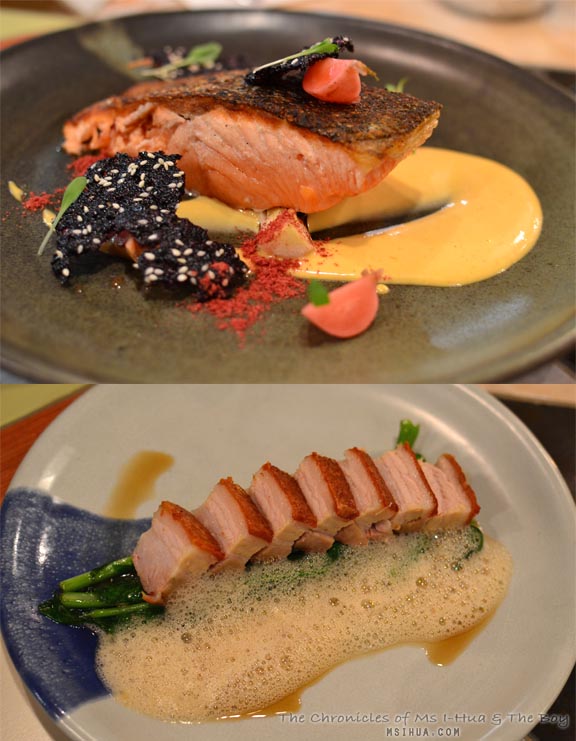 The menu at Mr Nice Guy is designed to be very much a sharing menu. As such the group had a merry time passing the main dishes up and down the communal table (as you would in a large family gathering).

The mains that came were traditional Thai fare but were really tasty. I would say Thai-Australian to sum it up best.

Take for example, the Home Smoked Tasmanian Salmon dish that came with coconut reduction, pickled radishes, black glutinous rice crisp, baby beetroot and dehydrated raspberry powder.  The fish was cooked to perfection and all the elements on the plate worked very well together. I was most intrigued with the dehydrated raspberry powder. Pla kept mentioning to have all the elements together in one mouthful. I did and it worked!

The second dish (winning dish for me) was the Hurstbridge Pork Belly, Kha Na, Chilli Garlic served with Oyster Sauce foam. Way to grab your attention with this dish. The pork belly was succulent yet tender with the crackling very much on the sexy side of crispy. 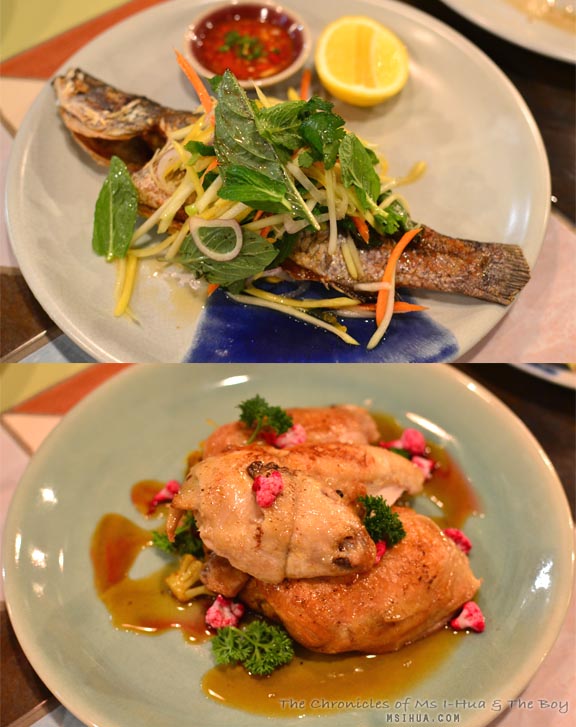 The next two dishes were equally as delicious as the first two, but less attention grabbing.

We had a whole Grilled Baby Barramundi served with Asian Salad and Nam Jim as well as Mr Nice Guy’s Famous Chicken, pickled and spiced cauliflower, leek and jus.

The grilled fish is reminiscent of Southern Thailand with its super spicy curry paste stuffed inside the fish. As David and Pla explain it, it’s a fish curry inside out 🙂

The poached chicken was tender and succulent, evidence of the careful and long bringing process which Will and the kitchen team put in. 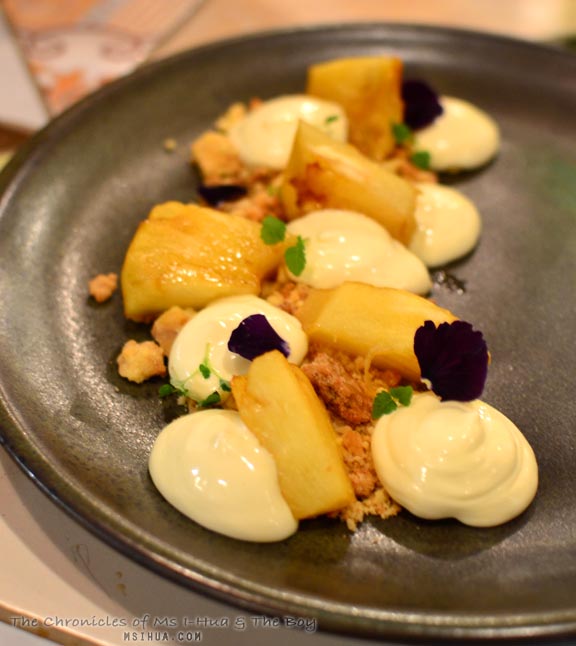 All too soon it was time for dessert. We had a deconstructed Lemongrass Cheesecake with Smoked Pineapple to finish.

It was light, decadent and a beautiful way to finish the night.

People will undoubtedly compare the food served here with the menu at Middle Fish. All I can say is that the only similarities that the two have are that Pla and David are behind the two Thai restaurants.

I can’t wait to return with The Boy to attack the salmon dish and the pork belly once again! 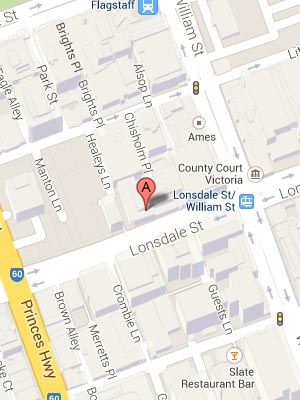