It must be the change in the weather. Vitamin D does wonders for people’s moods and feelings.

Take The Boy for example, ever since the sun’s been out longer, he’s been more spontaneous on impromptu dates with me. In winter, it was all about staying at home and being couch potatoes (which also has its merits :P).

For me, the sun being out means I have become more productive. Waking up is easier (hard to sleep with the sunlight streaming in across your face) and we get more done during the day. Maximising the sunlight we call it. 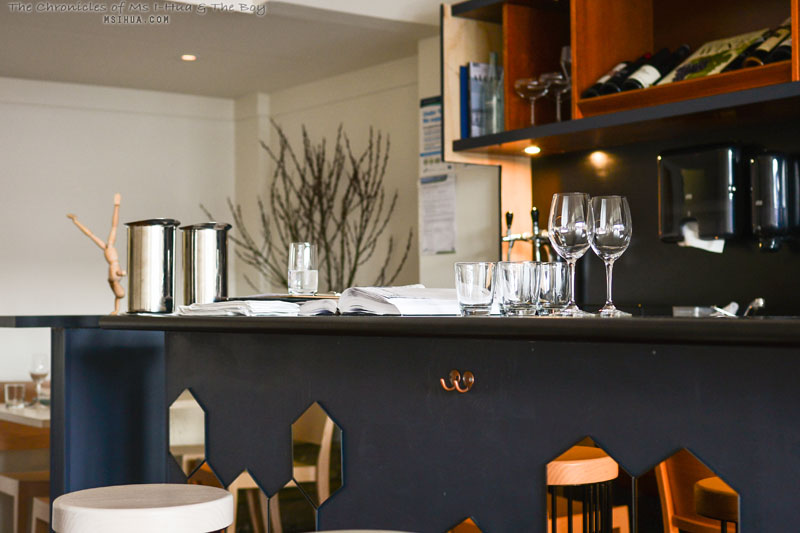 One such afternoon, after I had been to a fun filled Chocolate Tempering class at Xocolatl Cafe, The Boy came to pick me up and announced, “We are heading to Mister Jennings!”.

I was confused at first as he caught me by surprise. Racking my head, I wondered to myself who Mister Jennings was. Was he a media personality? A chef? A hitman?!

Clearly I have an overactive imagination before he could explain further, I asked The Boy, “Are we in trouble? Who’s Mister Jennings? It wasn’t me!”.

The Boy gave me an incredulous look that read “you know nothing, Jon Snow”.

It wasn’t until he pulled up on busy Bridge Road in Richmond that I realised Mister Jennings was a restaurant *phew*! 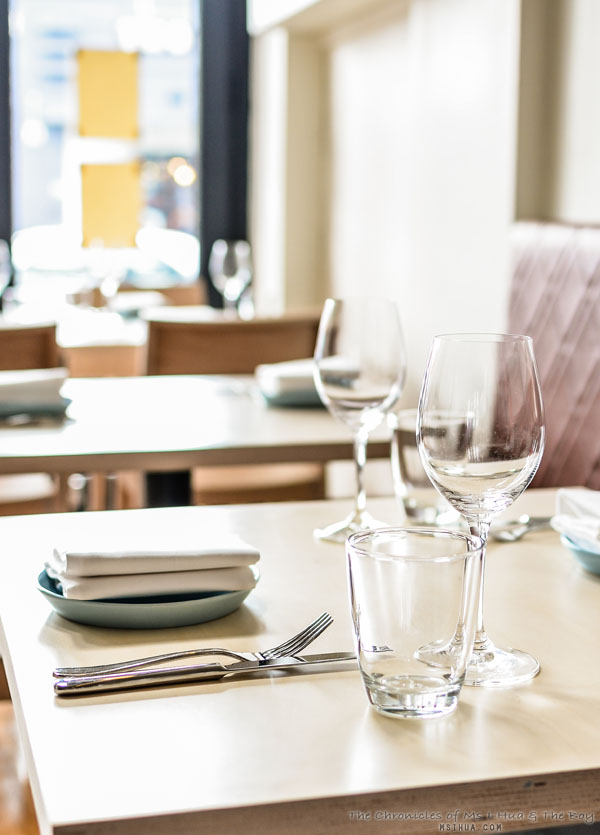 Chef Ryan Flaherty (ex-Estelle) has branched out to do his own ‘thang. Upon walking into Mister Jennings, I’m immediately wanting to know who their interior designer is! We loved the minimalist Swedish look of the furniture with key blue feature items on display. 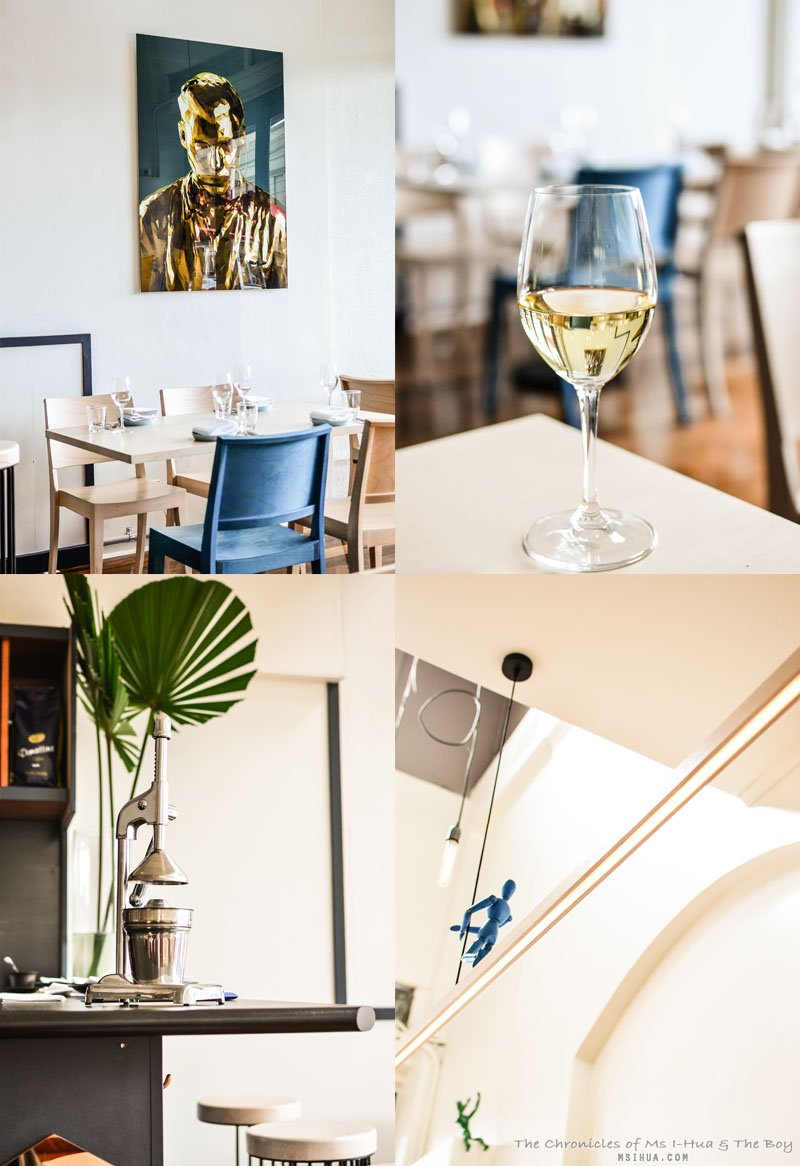 It was pretty quiet as we walked in and apart from Malcolm Singh at the front (I recognised Malcolm from our previous visits to Pei Modern) and two other tables, the restaurant was bare. That in itself was a surprise as Mister Jennings has been making waves in newspaper features and magazine shout-outs recently). Maybe we found a lull in the time, as we’ve since discovered that it can get pretty busy during dinner time.

Whatever the reason, we were very glad and thankful that we managed to snag a table before it became even more popular and bookings impossible to make.

Since The Boy was making decisions as it was his impromptu plan, he decided for us to go with the 5 course tasting menu at $80 per person. If you are interested in not having any alcoholic drinks, Mister Jennings offers unlimited still or sparkling water for $4.00 per person. 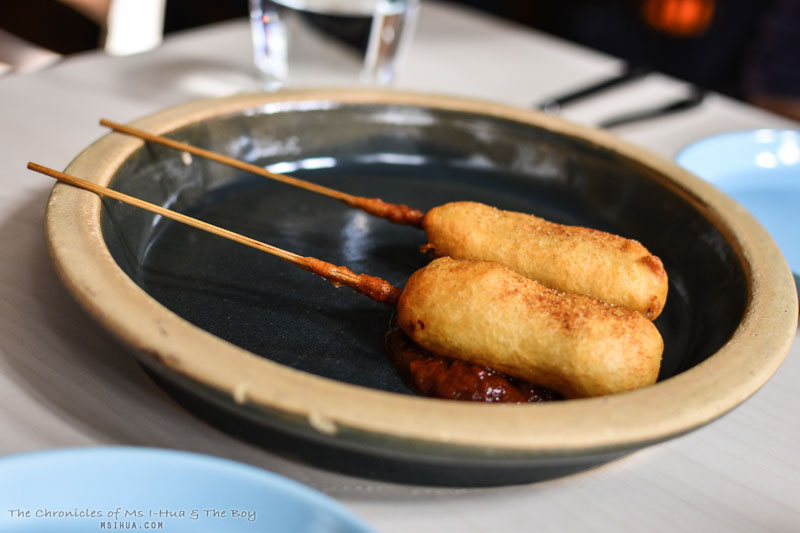 As our appetizer to get us started with the tasting menu, we were presented with every Aussie fun-fair, footy game, food truck, food snack.

Obviously, as this is a fine dining establishment, nothing is ever quite what it seems when served up on the plate.

This Dagwood Dog is Flaherty’s cheeky take on the traditional Boudin Blanc with a casual twist. 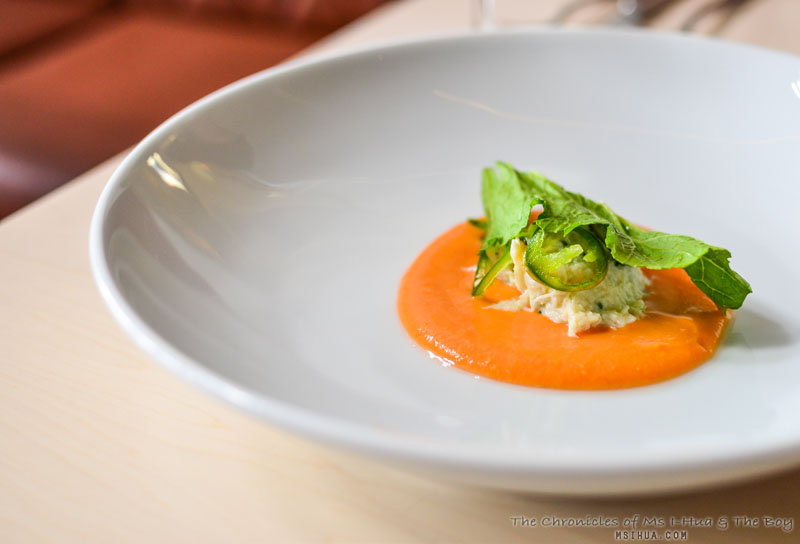 As the first course was brought to our table. I couldn’t help but exclaimed at the vibrant colour of the dish.

As I brought the first spoon to my lips, it was a light and delicate sensory experience. I accidentally said out loud to The Boy, “Why can’t your gazpacho taste as good as this?”

Bam-pow, minus ten points to me, wife of the year. 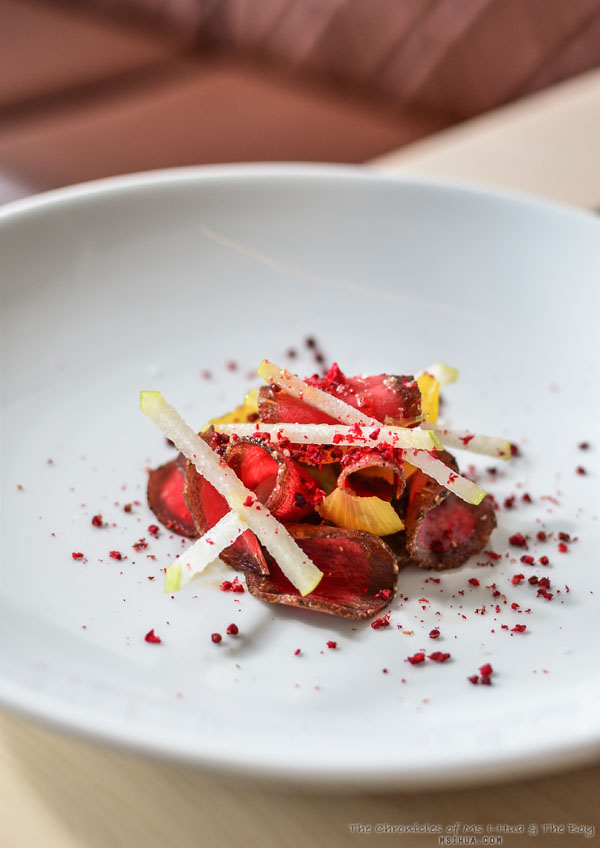 The next course to be served has now been marked as the signature dish of Mister Jennings. It doesn’t take long for you to wonder why.

The colours, texture and ingredients on this dish is a salute to inventiveness and culinary skill.

How did this dish come about? Malcolm regaled us with how Chef Flaherty wondered why chefs would wait for the meat to thaw once they had shaped it in the freezer, before searing it and serving hot to guests.

A lightbulb moment of, “hey, why don’t we just shave it as is and serve it frozen”, brought this dish into being.

Thin slices of frozen kangaroo starts to defrost in the mouth, changing its texture and flavour profile as you chew. It’s a dish that slowly reveals its flavour.

We loved the interplay of textures, temperature, the playfulness of the idea and vibrancy of the colours. 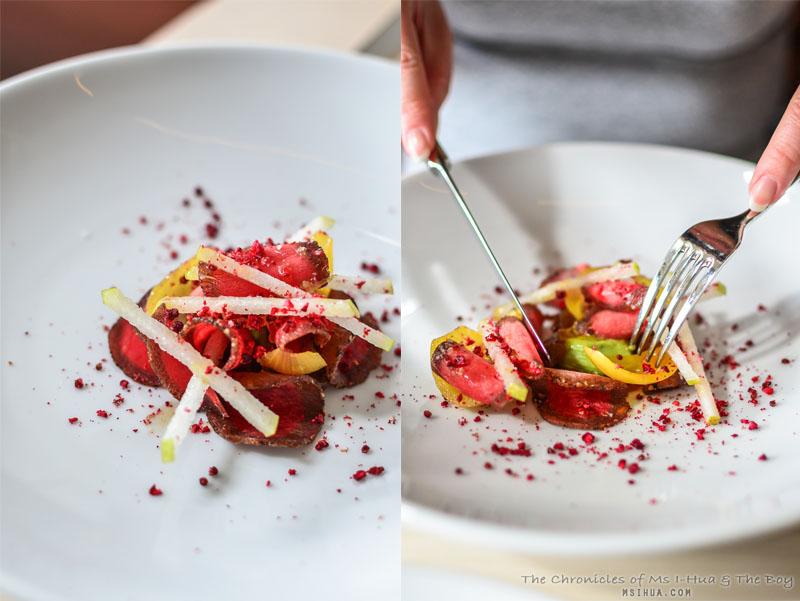 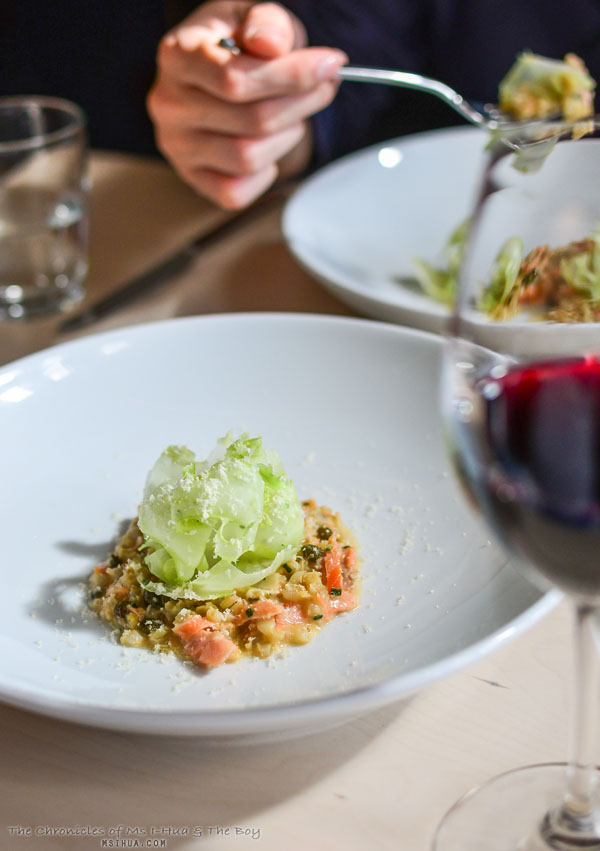 The next course was my favourite. Introduced to us as Chef Flaherty’s ode to risotto, it was anything but.

The textural component of the pearl barley was just a stunning introduction to the rich flavours imparted by the ocean trout. Thin slices of broccoli stems gave the dish a crunchy component.

How would we describe it? It is a risotto but not a risotto. Just close your eyes and let your other senses bring you joy. 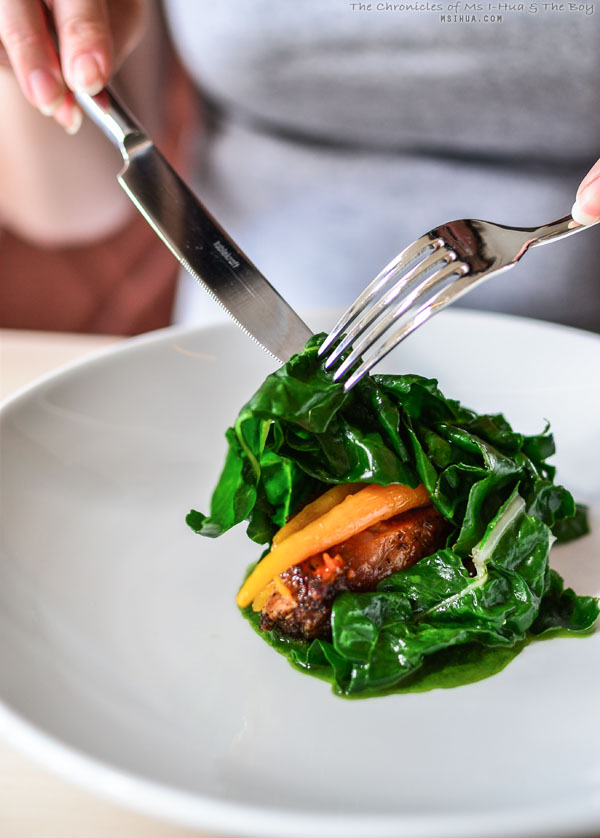 When the next dish was brought out to us. I turned my head to an angle and then my whole body sideways in an effort to glimpse under the striking green of the kale shroud on the plates.

Once the photographing was over and I was allowed by The Boy to uncover the layer of kale on my plate, a thick cut of pork jowl and baby carrots was revealed. Sitting atop a nettle purée, the light flavours and punchy lime pickle certainly helped cut through the fattiness of the jowl. 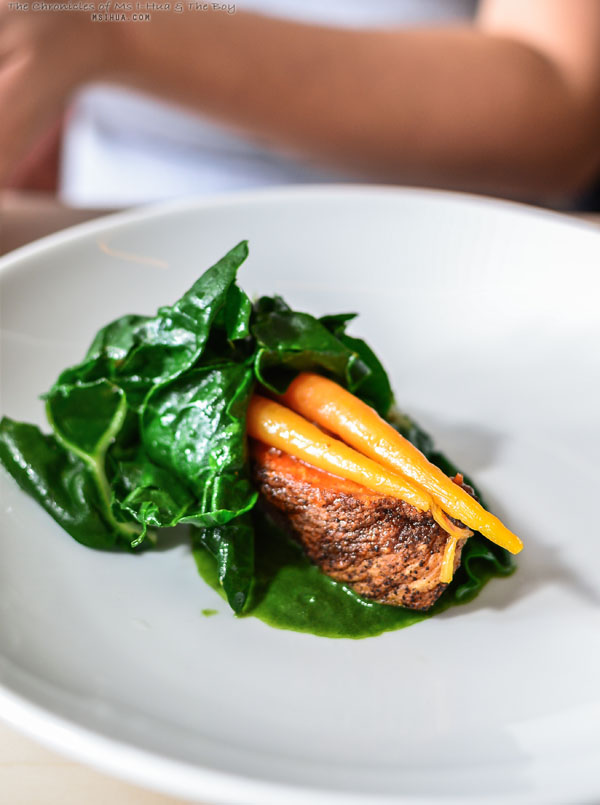 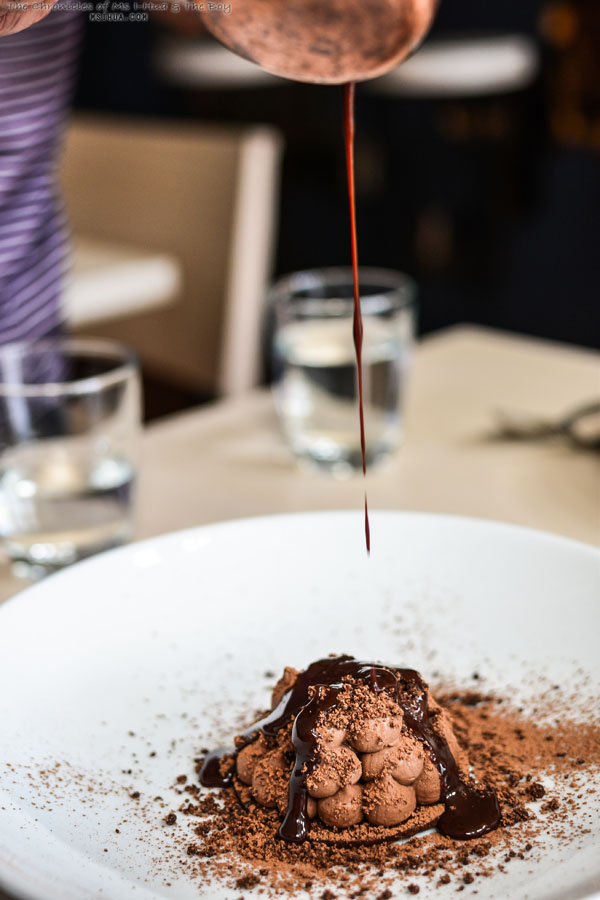 For dessert, like I child, I clapped my hands and stated the obvious by chanting, “chocolate, chocolate, chocolate” much to the bemused expression of Malcolm. It helped that by this time, we were the only couple dining in the restaurant, so I didn’t attract any attention from any others in the vicinity.

Could you have berated me though? Should this dish have been brought forth to be placed in front of you, would your heart not have skipped a beat too?

Would you not have returned to days of childhood gone by?

Chocolate in all its elements. Biscuits, powder, ganache, soil, and mousse. A perfect ending to a most refreshing meal. As petit fours go, we quite enjoyed the melt-in-your-mouth yoyo biscuits which came with the bill.

We loved the vibrancy and genius play with perceptions of food served at Mister Jennings. Sure, there were hints of Estelle here, but given where Flaherty has been in recent times, that’s not a bad thing.

He’s taken his experiences with Scott Pickett’s group and turned it on another couple of notches. Bars have been raised. If there was a form to fill, we would mark it under ‘Exceed Expectations’.