Things to do to make the Boy happy. Feed him good food!!!

So.. I decided to walk to Safeway, the Boy requested strawberries, figs and asparagus to be brought home.. so off I went, and found pork loins on special along with Granny Smith (baby) apples!!.. Fabulous…

Gloomier and gloomier, my baby isn’t going to be around… DAMN!…

Grow a backbone.. when did I become so dependent? Geez… My younger self would probably cringe and die if she knew how I’d turn out… stay at home woman, cooking happily over the stove, chubby on the side and dreaming about her man all day long… *sigh*.. cringe worthy indeed!!

I always wanted to cook pork chop with apples… (not applesauce)… apples!!… And the other day, I was watching Huey’s cooking adventures and he was cooking lamb with apples… so…

The ingredients below are as such. You might note the little box of grape tomatoes.. ignore that, I decided not to use it after all =) 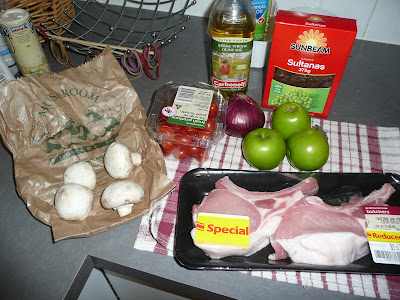 Chop the apples (3 of them, cos they were really small), Half a red onion, a little grated ginger, and button mushrooms (I used 4) 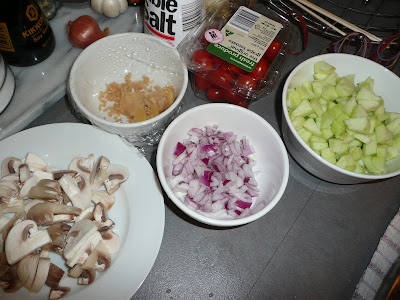 Whilst you are preparing the ingredients, soak the sultana’s (raisins) in a bowl of white wine.. I would actually recommend Brandy, but since I didn’t have any, I used white wine.. I was going for the fruity flavour after all ^_^ 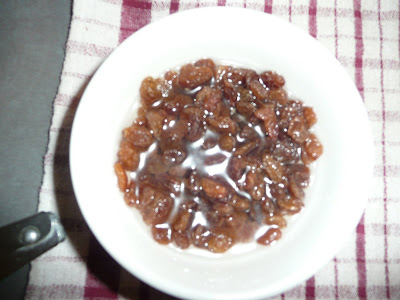 First up, you want to brown the pork chops on both sides. Not on an overly large fire, as you don’t want to overcook the pork loin chops.
Once done, plate the pork chops. 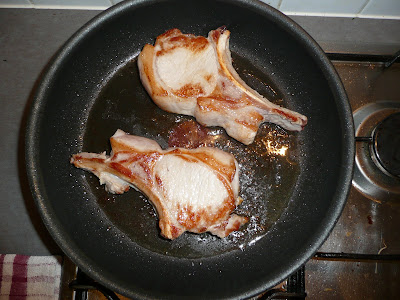 Saute the red onion in the remaining oil, sprinkling a teaspoon of brown sugar whilst saute-ing.
Once soft, chuck in the ginger and apples and stir-fry. 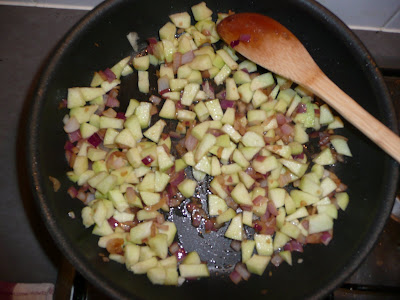 Once the apples are cooked, throw in the soaked raisins, along with the white wine and allow the wine to evaporate.
Throw in the mushrooms and allow to cook slowly on the fire.
Add in a cup of chicken stock and place the pork chops in the pan as such.
Turn the fire to slow heat and cook with the lid on for about 40-45 minutes. 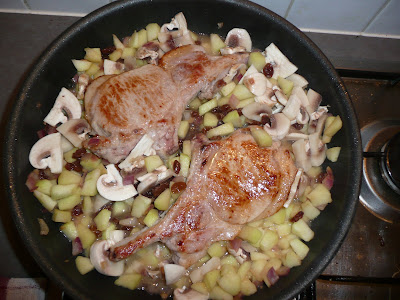 When the time comes, plate up *BEAM* 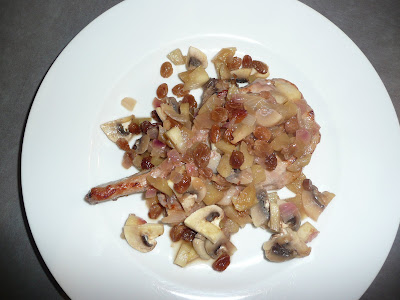 It’s up to you what you want to serve it with, I couldn’t decide, so ended up having it with toast instead! 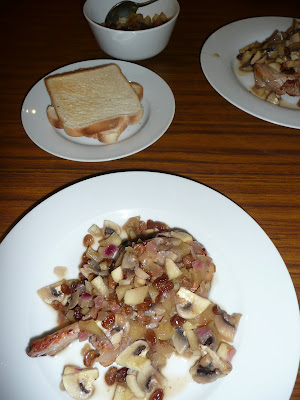