So the Boy left last night. The house is a bit emptier and a lot quieter. A lot lonelier.

I am feeling extremely sorry for myself right now. Just like a little puppy put into the garage for the first time and whining itself to sleep. That’s exactly what I felt like doing last night.

It took me 2 hours to fall asleep. Before that, I was cleaning and rearranging the furniture til 1 am. Because I couldn’t sleep. a few episodes of One Piece later, I succumb to lying in bed. But it was too quiet.

There was no heavy breathing next to me =(

Purely for selfish reasons, but that’s what being human is all about…

So for his dinner last night, as I didn’t want him to starve to death waiting for his midnight plane, I revisited simple stir-fries for dinner…. I didn’t take pictures of the actually cooking itself, because it’s stir-fry.. you should know how to, it’s like frying an egg, but because I’m nice, I’ll give you the step-by-step (sorta) guide *BEAM*!!!!

So these are the ingredients:
Garlic, 1 shallot, lemongrass (all chopped finely); Kailan (Chinese Broccoli [although how it resembles a broccoli is beyond my comprehension] or otherwise known as Kale; Chicken A (marinated with soy sauce, pepper, salt); Chicken B (marinated with pepper, salt, sugar and paprika); Sultanas (Raisins) and a lime (limau) 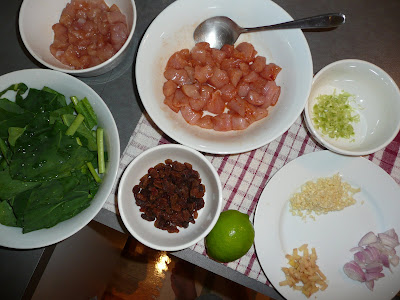 Stir-Fry Kai Lan:
1.) Heat up some oil in the pan and when hot, add in the garlic
2.) Once the garlic starts to brown, pop in the chicken
3.) When the chicken is half done, add in the Kai Lan (starting with the stalks first)
4.) Add some Worcestershire (Lea&Perrins), soy sauce and 2 tablespoons of Oyster Sauce and let it simmer with chicken stock (cover with lid for about 2 mins)
5.) Dish out and Ta-Dah! 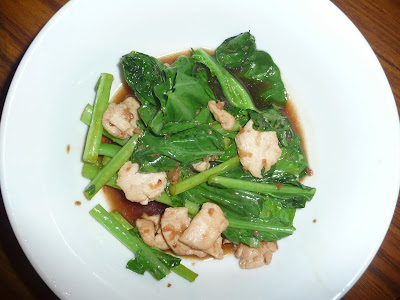 Paprika & Raisin Chicken:
Now this was a successful experiment… it was really delicious.. my sister asked if my raisins were about to expire since my last couple of dishes were with them, and I had to tell her no. It’s just that I have a sudden craving for them. So there.
1.)Heat up some oil in the pan and pop in the shallot and garlic. When the onions start to soften, add in the lemongrass
2.) Once the fragrance starts to hit you (don’t take this literally)… add in the raisins
3.) Once the raisins start to soften, pop in the chicken
4.) Add about half a cup of chicken stock, cover the lid and allow to simmer
5.) Dish out and serve with a wedge of lime

Note: Now I thought that there might be gravy to this, but apparently the raisins had absorbed the chicken stock and juices. Which made it even yummier =) 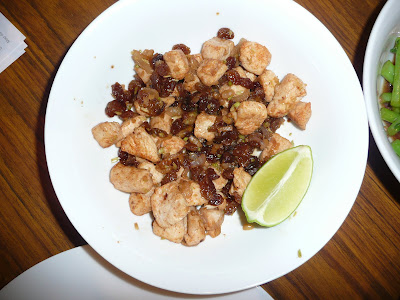 Serve with rice and there you have it. A delicious dinner. 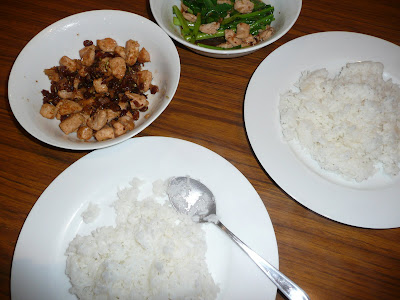 The finish product is a somewhat interesting version of Chiffon Egg Chicken Noodle, with a delicate South-Eastern feel. 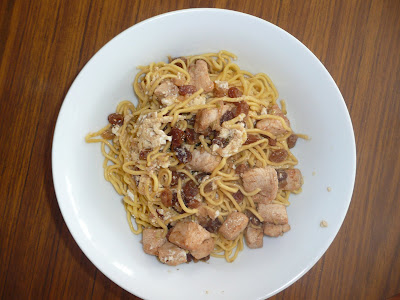