First of all, apologies to my few readers on the temporary hiatus… Scratty just came over from KL and I’m busy playing a nice host =) I’ve got her out of the house today shopping, so I have time to do this… lols… truth be told, I’ve just been lazy… I open up blogger, stare at the hundreds of pictures… procrastinate, then close blogger… 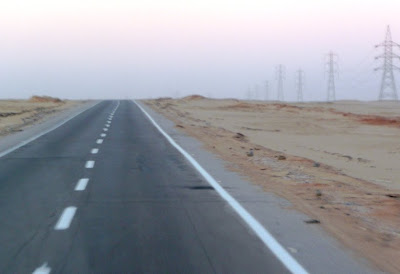 We were awaken at 2.30am. After a late night last night, and 2 hours of sleep, it felt like we were sleep walking to the bus with our breakfast pack (too sleepy to take a picture of the morning).

What with carrying a pillow each (to hug), bottled water, breakfast pack, bags… it was more than my brain could handle in the early hours of dawn. 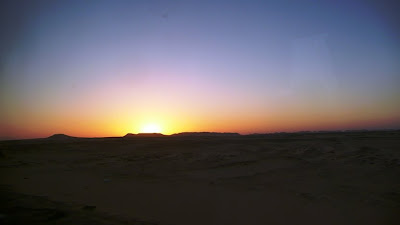 A few people were late to get to the bus on time and as a result, we missed the first convoy (escorted by the Tourist Police). Thus we had a long wait (until 4am instead of 3.15am). As we were the first bus of the second convoy, we had a guard deployed on our bus with his M-16 casually thrown on the seat beside him.

It wouldn’t have been so bad, if he didn’t insist on sitting on the seat in front of me and then promptly pushing his chair back into my knees and going to sleep for the next 3 hours!!! 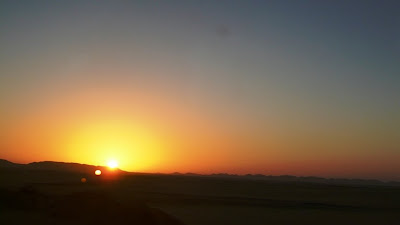 As if I dared to say anything. And great help he’d be if there really was a terrorist attack. He could have snored at them, I guess… 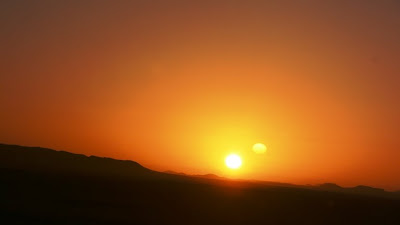 We caught the sunrise over the desert landscape and it was beautiful! 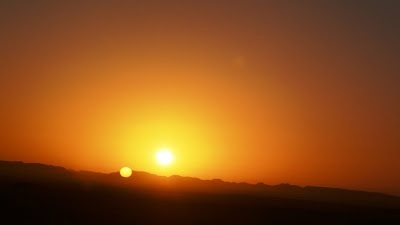 It’s ascension took about 5 mins, and thus, to get these shots , one had to be quick! 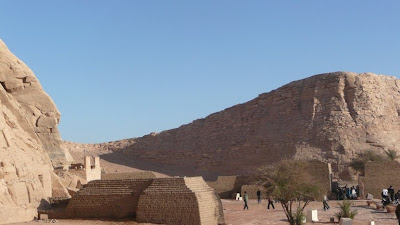 We arrived at Abu Simbel at 7.30am and it was everything I expected and more.

Because I’m lazy, here is an excerpt from Wikipedia:

“The twin temples were originally carved out of the mountainside during the reign of Pharaoh Ramesses II in the 13th century BC, as a lasting monument to himself and his queen Nefertari, to commemorate his alleged victory at the Battle of Kadesh, and to intimidate his Nubian neighbors. However, the complex was relocated in its entirety in the 1960s, on an artificial hill made from a domed structure, high above the Aswan High Dam reservoir.

The relocation of the temples was necessary to avoid their being submerged during the creation of Lake Nasser, the massive artificial water reservoir formed after the building of the Aswan High Dam on the Nile River. Abu Simbel remains one of Egypt’s top tourist attractions.”

You could also read more about it here –> http://en.wikipedia.org/wiki/Abu_simbel

Just around the corner, I would be experiencing a dream come true! 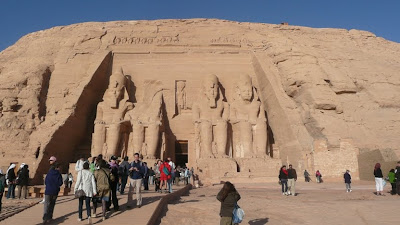 The Great Temple of Ramses II! 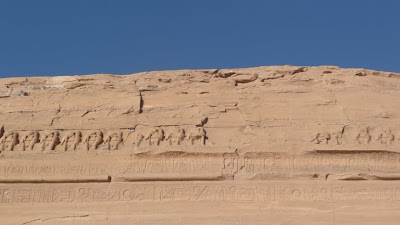 This picture above, is supposed to be a bunch of baboons worshipping Ramses II… yeah I know, Baboons!

The beauty and majesty of the two temples was really a sight to behold! The experience made me realise how very tiny and small I was in the great big universe. 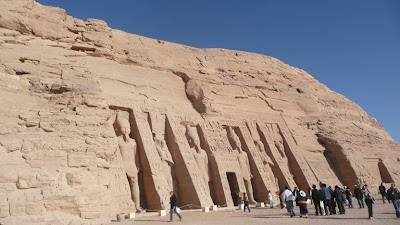 The smaller temple of Nefertari (Dedicated to the Goddess Hathor).

Nefertari (according to Farag), means the “most beautiful” or “the beautiful one as arrived.” Indeed, she was so beautiful and loved by Ramses II, that he built a temple for her in the image of the Goddess Hathor.

I was so awe-inspired that tears sprung to my eyes. Oh how I wish I could have seen this in it’s glory days! I am such a sook… a sad romantic fool… *sigh* 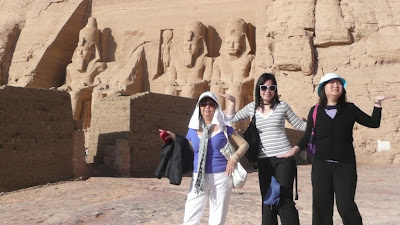 The Boy and I! 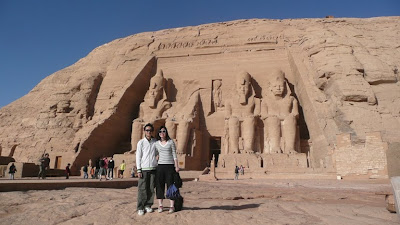 Now at the large stone carvings of Ramses II, at his feet and legs are carved his favourite wives and children… 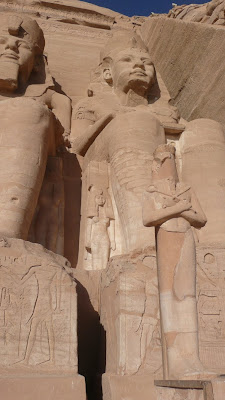 At the bottom of his feet, symbolically carved are the slaves that Egypt conquered. They were so beneath him, and thus were carved to reflect this. 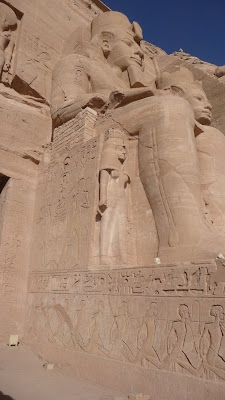 That’s me, teaching Ramses II to be a bit more humble… his head fell during an earthquake many centuries ago, and this was replicated when UNESCO and Egypt rebuilt this site. 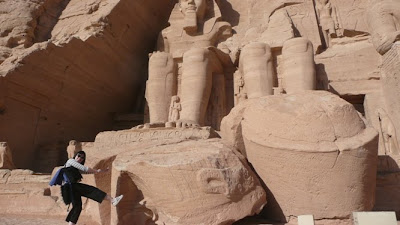 It took them 4 years to rebuild and chop of the original mountain top on this site.

The original location of these two great temples can be seen below, in Lake Nasser. 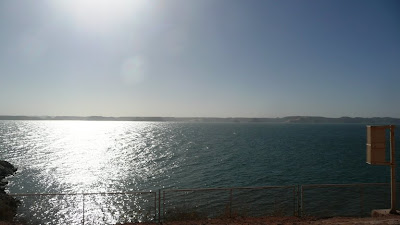 We bought pictures for the insides of the temples (Ramses II & Nefertari) as we were not allowed to take photographs or videos inside. Smaller sized pictures were $5 and the larger sizes were $10 (naturally, we bought both –> US currency)

The two hours passed by too quickly and before you could say “Pharoah”, we were back on the road. Another long drive back to Aswan.

On our journey back, we stopped by to visit the Aswan High Dam, the great reason behind the relocation of the Nubian villages and temples. Dr. Farag explained to us the benefits of the High Dam to the Egyptian people especially during the high floods and drought seasons. 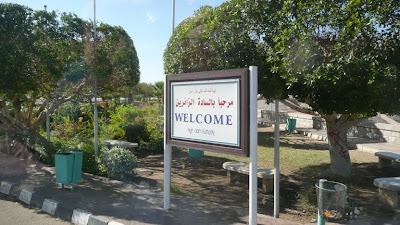 Unfortunately, the High Dam meant the lost of the ancient Nubian viallges and temples. 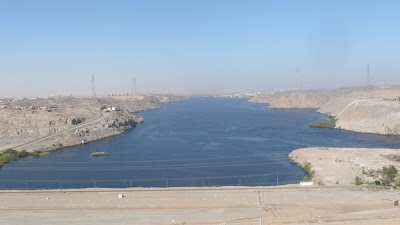 Hence, the relocation of 17 important temples, 3 of which we visited (Philae and Abu Simbel). Here, you can see one more temple, relocated to the banks of the Dam (Lake Nasser). 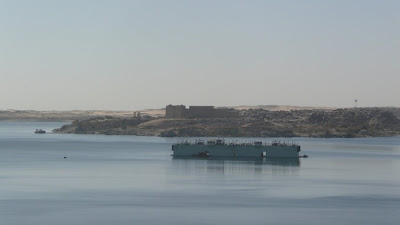 This is a monument built at the High Dam to honour the friendship between the countries that helped Egypt in the relocation of the temples and the building of the high dam. 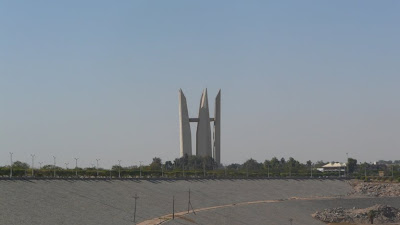 Because this post is extremely long, I’m breaking it up to two… so the next post will be a continuation of Day 4