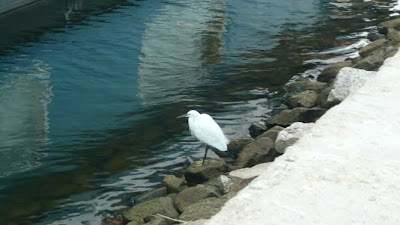 Another early morning, this time slightly better… 5.00am! 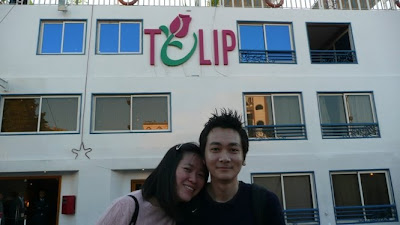 The Boy and I in front of our cruise ship =) 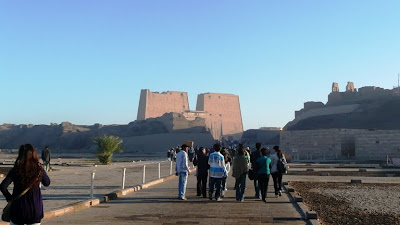 Today, we were taken to visit the Temple of Edfu (Horus), a major Ptolemaic temple, built between 237 BCE and 57 BCE, into the reign of Cleopatra VII. 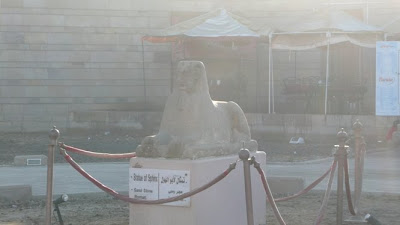 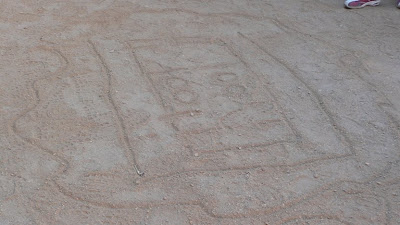 Of all the temple remains in Egypt, the Temple of Horus at Edfu is the most completely preserved. Built from sandstone blocks, the huge Ptolemaic temple was constructed over the site of a smaller New Kingdom temple, oriented east to west, facing towards the river. 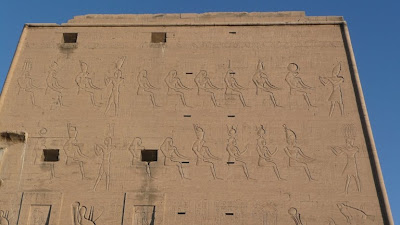 The later structure faces north to south and leaves the ruined remains of the older temple pylon to be seen on the east side of the first court.

This is a replica of the solar boat, the real solar boat is on display in the Louvre in Paris (as is a lot of items in Egypt). 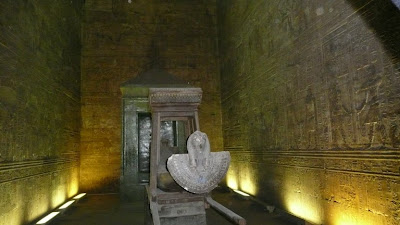 Once again, the magnificence of this structure was awe-inspiring. I’ve said this so often, that I am know beginning to sound like a broken gramophone.

The blacken ceiling within the temple showcases a replica of the night sky. Beautifully painted on, it is impossible to clean the soot from past fires from the ceiling without destroying the paintings. Thus, it has been left in its blacken state. 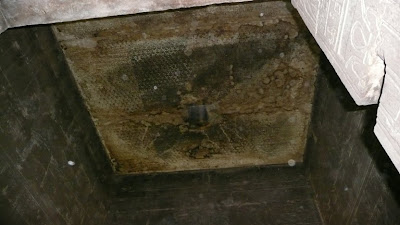 Farag mentioned, that the art and technology used in the construction of this temple was at the point of decline, with the Middle Ages being the most magnificent in its art and beauty. 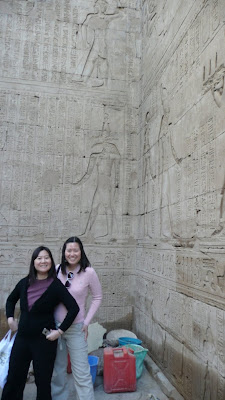 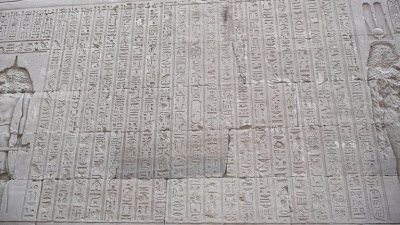 The tiny and poor Sorbek. This ancient “comic strip” was carved all along the back wall of the temple, showing how the Great Horus contains evil (in the form of Sorbek –> in a hippo form). 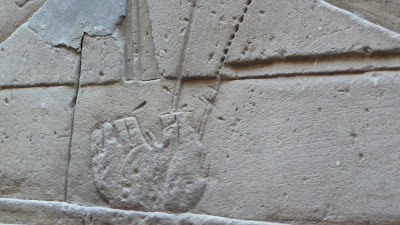 The Boy and I paying tribute to the double crown statue of Horus. 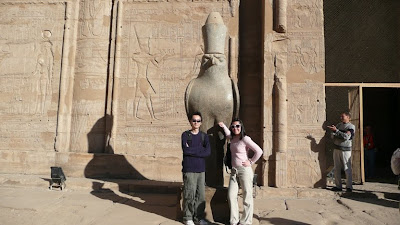 Big Sis, Madam Mummy and I feeling sorry for the fallen Horus and its lost/stolen double crown. 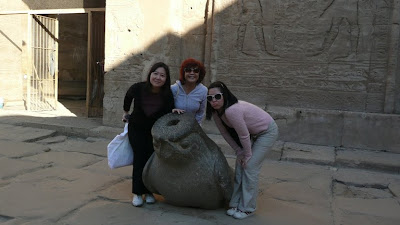 Big Sis and I re-enacting the scene behind us where the Pharaoh (I) am being rewarded by Horus (Big Sis) for winning a battle. 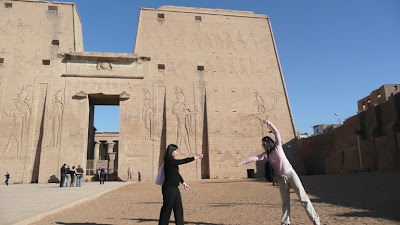 Big Sis and I are one of the many Goddesses witnessing the crowning moment of Glory (somehow, we look like we’re sitting in a bus instead!) 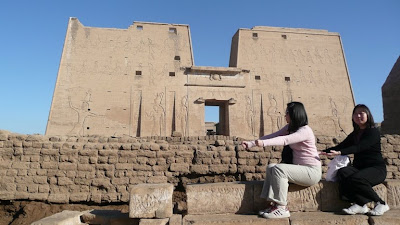 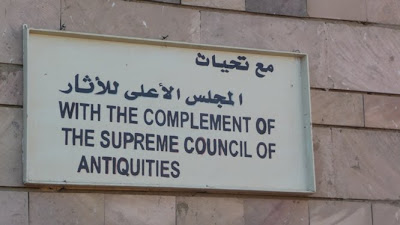 After 2 hours of listening to Farag, learning and playing around, we were given a nice and relaxing day off to laze around back in the ship. 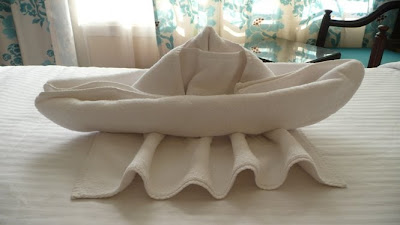 Look at the present the housekeepers left for us today!!! Amazing! 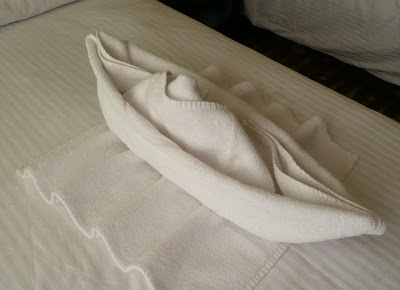 One side of the boat… 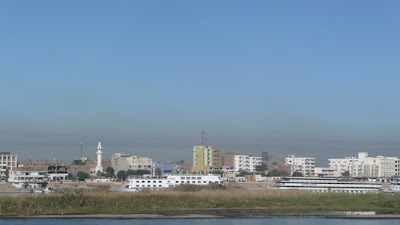 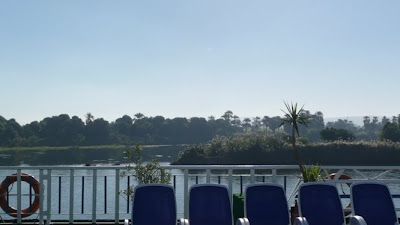 We spent our time sunbathing in our winter gear on the deck. I’m all for posing like Scarlet O’Hara, but the Boy frowns upon such ridiculousness…*sigh* 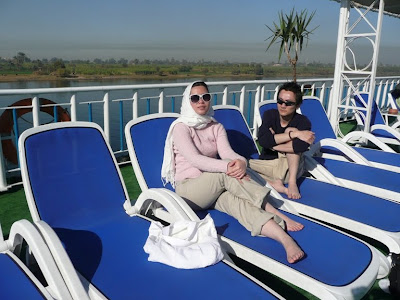 Farag also wrote our names in Hieroglyphs, which were promptly seized by the on-board Jeweller and we were somehow, “tourist trapped” into making our own Hieroglyphic necklaces and bracelets.

However, we were very happy to have our personalised Cartouches’ (pronounced: Car-Toosh). Mine cost about $55 and the Boys was $60 for a pendant. The seller took a liking to me and gave me a good discount, all the whilst lamenting how unfortunate that he recently got married to a 19 year old girl (he looked in his late 30s or early 40s)!!!

As I am writing this, I am sitting on a deck chair in the sun and sailing towards Luxor. The Boy is excited to see the Esna Lock (even though I keep telling him it’s not a big deal). 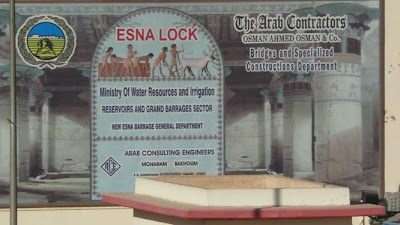 I myself cannot wait for tomorrow’s busy schedule! Tonight, we also have the Galabiyya Party (literally means “Men’s Robe).

Although a whole heap of boats have lined up and gone before us (through the lock), we have been sitting here waiting… and waiting… 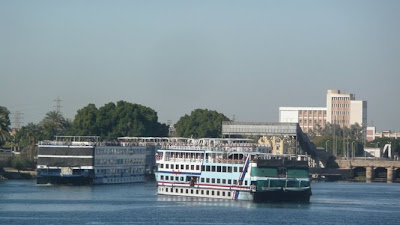 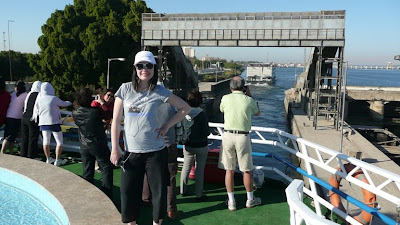 Dinner for the night consisted of Kushari!!! 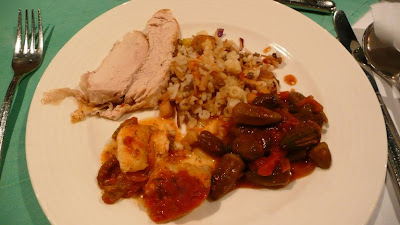 Kushari is a simple yet healthful dish of pasta, rice and lentils widely sold in small Egyptian restaurants and roadside stands. With its full complement of protein, a spicy topping of tomato sauce and crispy fried onions, kushari is often considered the Egyptian national dish. It was originally a poor man’s dish, but nowadays kushari is enjoyed by all strata of society. Variously spelled koshari, kosheri, koushari or koshary. 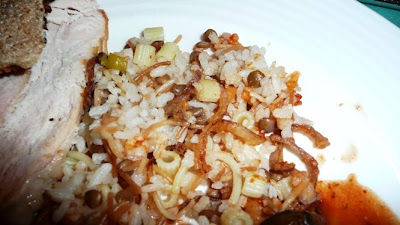 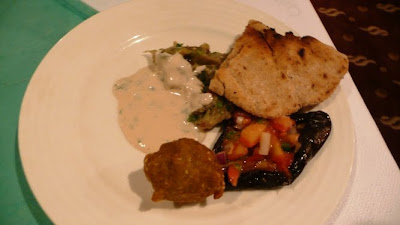 Beautiful flowers carved out of vegetables and fruit! 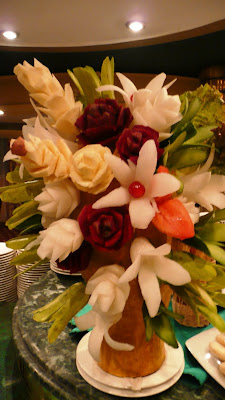 Ain’t it aesthetically pleasing to the eyes? 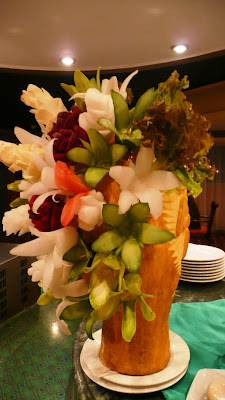 The Galabiyya party was hilarious, none from the tour, except us Gen-Y’ers turned up… a great total of 7 people!

We ended up playing party games that could be likened to a 5 year olds birthday party. However we did have fun.

After a long and relaxing day, we had to go to bed early as the next morning was another 5am start.