So after lunch at El Hussein’s, we were taken to the Papyrus factory (shop). We were introduced to the art of making papyrus. We spent about LE875 on 5 papyrus paintings. Very proud of ourselves, although dissapointed that we didn’t get more…

In the picture below, you can see the papyrus in it’s raw form. That’s the only picture we took, as photos’ aren’t allowed (to prevent the art from being copied out, but everywhere else sold the same stuff, so I don’t know what they were worried about). 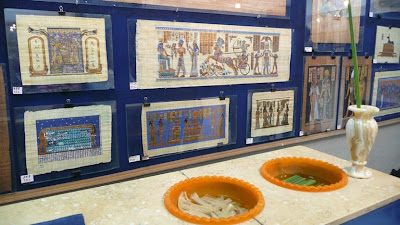 From the papyrus shop we were taken to visit Luxor temple. That’s me with the obelisks (remember the quarry in Aswan that I visited before? The one with the unfinished obelisk?). The two obelisks, one which is given to France, stand at the entrance of the temple. It was a nice conclusion to the visit to the quarry, as we could now picture, the before, during and after of the journey of the obelisks.

“Known in the Egyptian language as ipet resyt, or “the southern sanctuary”, the temple was dedicated to the Theban Triad of Amun, Mut, and Chons and was built during the New Kingdom, the focus of the annual Opet Festival, in which a cult statue of Amun was paraded down the Nile from nearby Karnak Temple (ipet-isut) to stay there for a while, with his consort Mut, in a celebration of fertility – whence its name.

The earliest parts of the temple still standing are the barque chapels, just behind the first pylon. They were built by Hatshepsut, and appropriated by Tuthmosis III. The main part of the temple – the colonnade and the sun court were built by Amenhotep III, and a later addition by Rameses II, who built the entrance pylon, and the two obelisks (one of which was given to France, and is now at the centre of the Place de la Concorde linked the Hatshepsut buildings with the main temple.

To the rear of the temple are chapels built by Tuthmosis III, and Alexander. During the Roman era, the temple and its surroundings were a legionary fortress and the home of the Roman government in the area.” 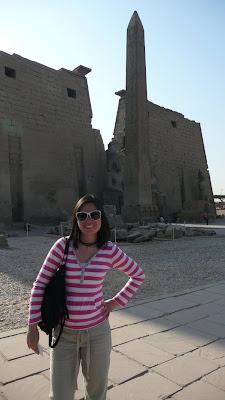 The fallen statues have been reassembled, awaiting restoration. 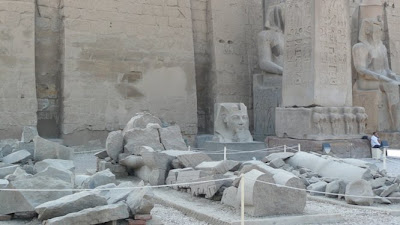 The area right behind the first/entrance pylon… built during the reign of Ramses II. 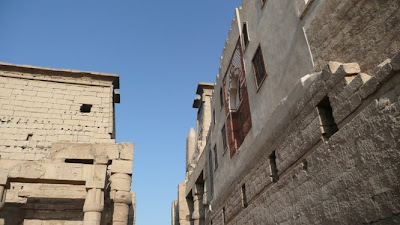 The columns and remainding of the walls behind the first pylon. 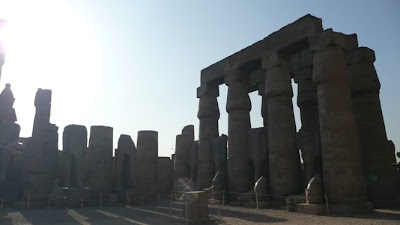 What I found interesting was the Mosque ( Abu al-Haggag) that was built in the temple. It was buit on top of a church chapel which was built within the Graet Court of Ramses II in this temple. 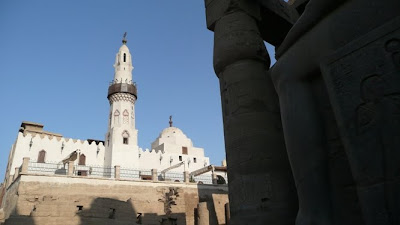 A different style to the columns, represented by bunches of papyrus instead of the usual florets of lotus and papyrus flowers decorating the top of the columns. This is located within the Sun Court of Amenhotp III. 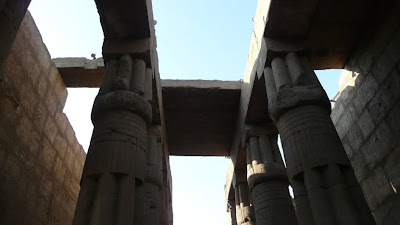 The walls in the inner sanctum of Amenhotep’s III birth room are dedicated to Amun-Min. A joint between the belief’s of Amun and Min. Everyone was giggling at this depiction and it explained the many tourist souveneirs of this figure of Amun-Min. According to Wiki, Min is an Ancient Egyptian god whose cult originated in predynastic times (4th millennium BC).[1] He was represented in many different forms, but was often represented in male human form, shown with an erect penis which he holds in his left hand and an upheld right arm holding a flail. As Khem or Min, he was the god of reproduction; as Khnum, he was the creator of all things, “the maker of gods and men”.[2] As a god of fertility, he was shown as having black skin to reflect the fertile black mud of the Nile’s inundation.” 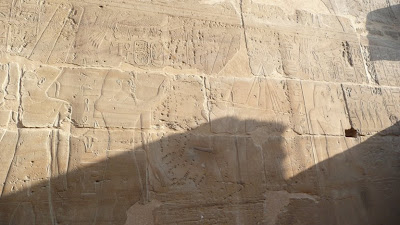 Within the central chamber, lies the cult sanctuary of Amun, and we could still make out the remnants of Roman Art & Plaster from the 3rd century AD, over the beautiful carvings and hieroglyphics of the ancient Egyptian.

The Luxor temple was taken over many times in it’s long history, and during the reign of the Romans, this chapel was converted to a Christian Chapel. 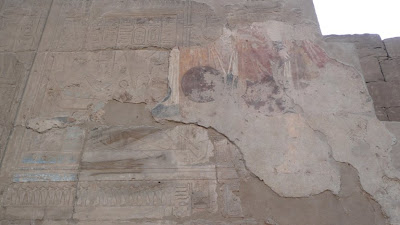 The two rows of sphinx lining the route to Karnak Temple. 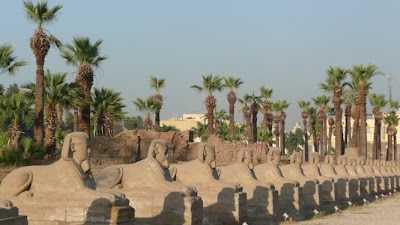 Approximately 3km long, this boulevard of sphinxes has now been separated from Karnak by the city it lies within. 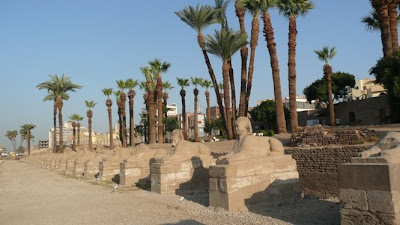 Restoration is under way to join the route of the two temples once again, but it is proving difficult as a mosque stands in the middle of it. 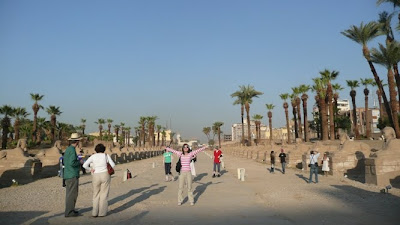 Farag and I posing at the entrance of the Luxor temple. I was dissapointed that we did not have the time to visit the nearby Karnak temple which apparently took over 2000 years to complete as additions from new Pharaohs kept the temple growing.

Instead, we were given the time (2 hours) to shop at the Luxor Market (Sheesh). At the market, we managed to drive successful bargains and had the shopkeepers repeating to me that my “husband” was a very good man. Difficult, but good. Lol…

We had our dinner in the local Nubian Centre. 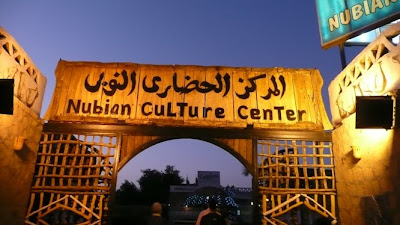 Food was usual in it’s variety. 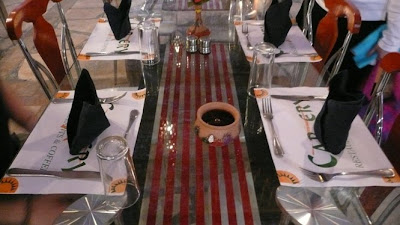 Grilled meat was the specialty, which I couldn’t indulge in unfortunately. 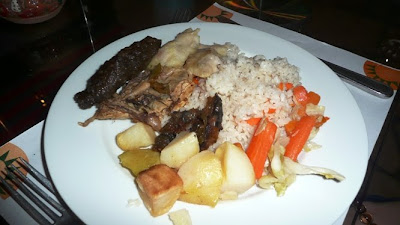 So I had the same food again. 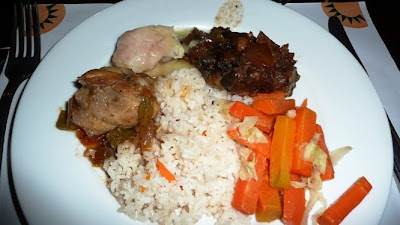 From there, began our mad journey to Alexandria. Firstly, we have to catch the plane back to Cairo at 7.50pm, and then a long 4.5 hour bus ride to Alexandria.

As the night wore on, tempers grew shorter. We arrived at the most beautiful hotel at 2.15am and were told that our wake up call would be 6am.

One particular uncle temper burst at this point, and shouted at poor Farag and our tour guide, telling them off in a very loud and arrogant way how he was not to be treated this way. Mentioning that he “could not enjoy life” at the rate we were going.

The Boy and I were extremely tickled by his outburst and for the remainder of the trip, we giggled and snickered behind that man’s back. HAHAHA…