When Ms Fashionista agreed to come to Melbourne for a visit, Ms Tinymouse and I were super ecstatic!!.. A GIRLY WEEKEND!!! What better task than to sit back, relax, gossip, giggle and dress up for no reason…
What better place to do that than at Cafe Vue‘s Cocktail Night. So I rang and booked for 3 for their October Cocktail Night, which was themed The 5th Element, to be told by a pleasant lady on the other line that unfortunately, the cafe was fully booked for that first Friday of October.
She asked if I would like to be informed if a cancellation occured, and of course I said, YES!
Fortunately, there was a cancellation and we made it!

We were told that the doors would open at 6.30pm and the first course would be served at 7.00pm. We arrived to see that the place was indeed filling up fast!

As we were seated, we were informed of the process and introduced to the concept of the Cocktail Night. Being the foodie that I was, I begin jotting down notes as each “element” was brought to us, as there was alcohol involved and I wasn’t going to trust my memory on this ^_^

First cocktail, representing the ‘Water’ element, was a bit confusing, as we were left to our own device to figure out how to drink it. Apparently 3 giggling girls could get it wrong!… We drank the shot and then had the lemon ‘oyster’, rather than the other way round, much to the amazement of the couple seated next to us…

As a drink, because it was a shot, this went extremely quick and I was feeling quite lightheaded! My tolerance to alcohol has pretty much gone downhill ever since I stopped working for companies that offer month end drinks 😛

The first course that was paired with the cocktail was a delicious Tuna tataki dish. With the most delicate edible sand and oyster emulsion. I quite literally wanted to lick the plate clean! (I DID NOT, in case you were wondering!)

This dish would be my second favourite dish of the night!

The second ‘element’ arrived, a cocktail comprising gin and representing the element of ‘Air’. This was our least favourite drink… it was quite bitter and neither of us finished it off… it had an interesting introduction though!

Before we were allowed to drink, there was a brief introduction, and one waitress released a lavender and lemon scented mist upon us (from a perfume bottle!)

By this stage, Ms Tinymouse was extremely giggly and kept succumbing to laughter at anything that was being said, much to the amusement of the lady seated next to us, whom we later discovered was a free-lance Journalist doing a piece for The Age.

The second course, was our most FAVOURITE dish of the night! Buckwheat risotto with duck egg and cranberry… second best risotto I’ve ever eaten (first being from Tutto Benne), actually could be one of the best.. considering the last one I had from Tutto was a complete disaster!! (Chocolate and red wine risotto, you ask me why? I’m just as confounded as you…)
The delicate balance of flavours and the crispiness of the duck (bacon) and cranberries worked really well together.

We took quite a lot of photos (as can be seen), with Ms Fashionista’s SLR camera… which prompted one of the waiters to demand, “Okay, whose the food blogger here??!”… hence. how we found out that the lady next to us was a free lance Journo and now a Twitter acquaintance 🙂

The waiter was hilarious and was very friendly and chatty… just the way we like it with alcohol!

The third ‘element”, Earth, was Ms Fashionista’s favourite… it was a frozen cocktail (meaning ice-cream!), of whisky and dark chocolate and had a very very intense smoky essence…

Paired with the Earth element, was a pan smeared kangaroo loin with celeriac puree & cocoa soil… (those tiny bits of meat at the background is speck)

When the waitress said, “Speck”, I had to ask her to explain.. brain was already very slow … I had assume she was saying that the board was speckled!… (yes yes, laugh all you want)

The fourth element was my favourite! And I even polished off Ms Tinymouse’s cocktail (by this stage, she was drinking warm water and no alcohol)…

Representing ‘Fire’, this cocktail was a mix of cognac and burnt sugar (do you see why I liked it?)

Paired with it was an interesting dish… a cheesy panna cotta with red wine gel… those little squiggly sticks you see poking out of the panna cotta, are actually squid ink grissini, a bit tasteless, but very crunchy…
It was at this stage I caught the gentleman next to us licking his plate! The waiter (our good friend), approached him to say that we unfortunately missed the best picture of the week!

The last element, the 5th Element, we were told to guess…

We were also told that we had to make the cocktail ourselves, by balancing the flavours provided…

Paired with the last course, a dessert… which was a reversed floating island… 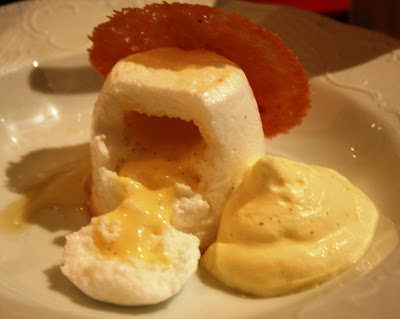 Delicious vanilla cream oozing out of the meringue shell encasing it, the dessert was sweet and was a great way to end the course.

Did you guess what the last element was?

It was a super fun night, filled with much chatter (we were chatting to the two tables immediately next to us and sharing notes!)

Would I return for another adventure? Most definitely… am already planning one for the girls at work for November’s menu!!!

Food/ Cuisine: Modern French
Dining Style: Cocktail and food degustation
Overall Food Rating (Based on the Dining style): 8/10
Restaurant ambiance: 7/10 (it was quite cold, and we were sitting inside the cafe!)
Service/ Attitude: 8/10
Value for money: 8/10 (5 courses, 5 cocktails for $75) 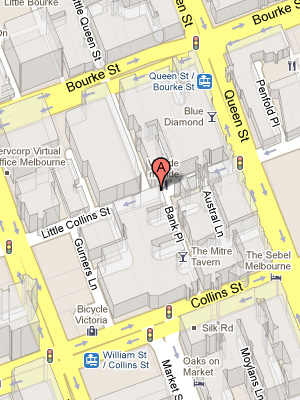