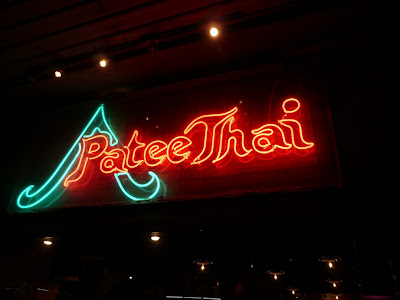 Ahh… the chance to try food at new places always has me really excited.

Ms London suggested that we try Patee Thai. We were meeting up for probably the last foodie session as she will be returning to the land of cold, wet and grey soon…. *sniff* *sniff*

The interior of this restaurant, I found to be a bit dark, but quite authentic. They had heavy craved wooden decorations everywhere. 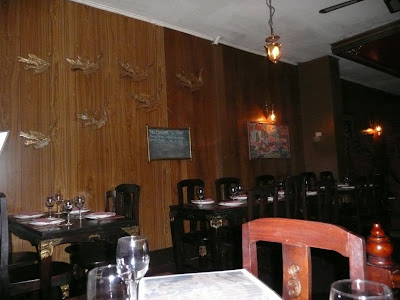 The Boy and I were early and were given the choice of sitting downstairs at “normal” tables and chairs or going upstairs to sit on “cushions”. I said “Cushions!!”

So we were brought upstairs and the waiter in charge, showed me to…. a table with 4
chairs!…. By passing all the cute settings of tables and cushions on the way.

I felt a bit discriminated, because I did ask for the cushions and I assumed we were given the table as we didn’t make a booking.

To add to the slight, Ms London who didn’t know we were already seated, was ushered to the cushions!!…. “Everyone is a little bit racist” – Avenue Q.

Not happy with that.

The food was alright. We decided to forgo the Entrees as there wasn’t anything too special in them and go straight to the mains.

We ordered the “Grilled Marinated Chicken with Turmeric & Coriander Roots” $14.90

It was really yummy, but it seemed to have been covered with Sweet Chili Sauce gravy, which was good, but not very authentic. 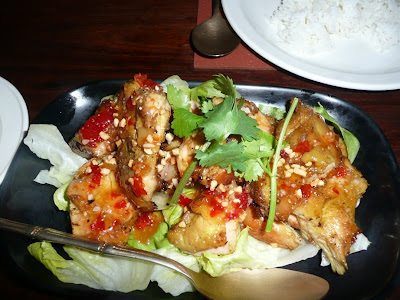 This dish was “ok”. Seriously. The duck was more akin to BBQ pork slices (char siew) in coconut milk. A tad too much “santan” for me.

It was alright, but not fantastic. 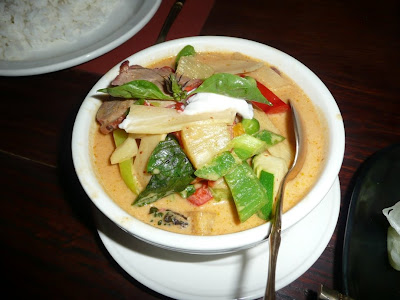 This dish was really good. The Boy reckon it was the best out of the 3 and I voted for the Chicken dish. 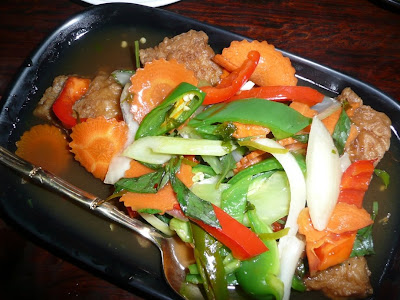 Being greedy little pigs, we opted for 2 desserts.

Now this was delicious and not what we expected at all. The waffle was full of Bananas! 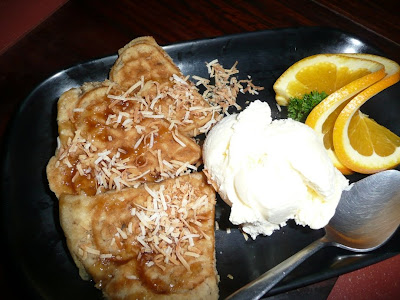 This was interesting, as we were expecting the sticky black rice to come in a bowl laden with coconut and mango sauce, and instead it was a dry sticky pudding. It was good, but I much prefer the ones we have back in the South East Asia. 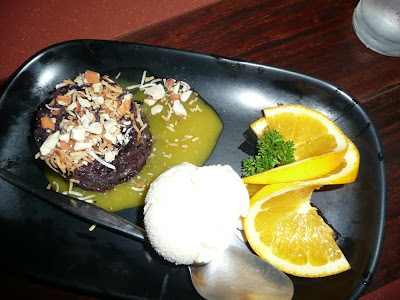