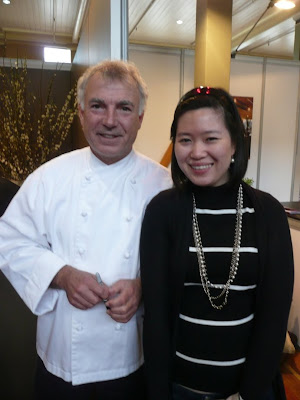 That’s right.. that’s me and the man himself… Jacques…

I would like to lie to say that he took a picture with me whilst I was dining at his restaurant, but as you can tell from the hair (mine)… this was taken during a Taste of Melbourne 2009…

Recently (the 28th of May to be exact), I had made a booking at the famed Jacques Reymond restaurant to celebrate the Boy and mine’s 9th anniversary (a month early!)…

That’s right folks… we have been together for a whopping 9 years! We’ve been inseparable since we were 18! Imagine that! Nearly a third of my life (!) has been spent in this relationship and I still get heart flutters when he calls me on the phone =) Anyway, back to our dining experience… when we arrived, it was starting to drizzle (it’s called raining here in Melbourne, meh)… and we were greeted at the front door by the staff smiling brightly bringing umbrella’s out to shelter their guests coming in.

We were brought to our table with efficiency and seated at an area where it was non too bright… *sad face*… I was ready to throw a tantrum because I had had a long and tremendously busy day at the office and anything small would throw me… so here I was pouting like a petulant child and ready to throw a hissy fit at a 3 chef had restaurant! 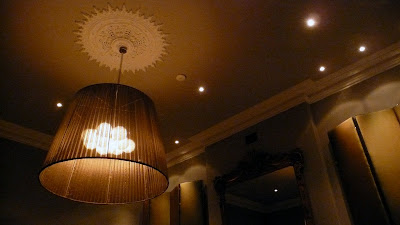 The Boy said calmly, “It’s up to you, but you can ask them if they would let us change tables to the brightly lit one, for your pictures”…

And I did, and with amazing alacrity and efficiency (imagine a bunch of fantastic butlers swooping in and moving you from one table to the other without you even realising it)…. Note: We had already been served our complimentary bread and gougere 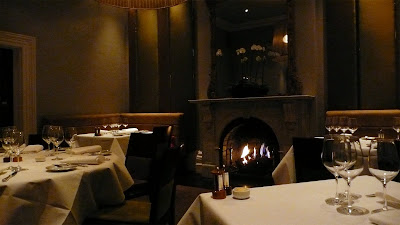 So as you can imagine, my mood went from 0 to 60 pretty quickly and I was already raving on how fantastic they were service wise!

Back to the meal…

As usual, the Boy had to stop me from stealing utensils/cutlery/salt and pepper grinders etc… however, having had the best butter in the world at Maze…. this didn’t quite match up to that.. but it was still soft and creamy… 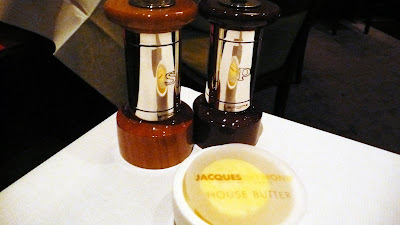 We were given the usual variety of bread (white and multigrain) and a bread stick called (I may be wrong, but sounds like), Ebby/Ebbie (I asked the waiter twice!) 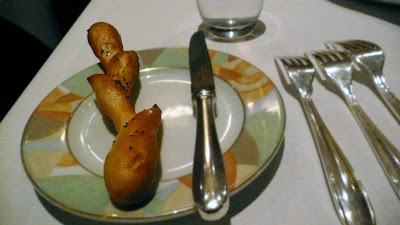 This was served to us piping hot and it was delicious! This is known as Gougere, which is basically a Gruyere Cheese Puff (not unlike a cream puff) 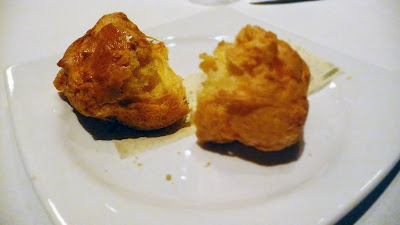 The first meal of the 8 course was a lemongrass, spinach and rock lobster soup (served in a shot glass), fragrant Tiger prawn, and sweet potato and turmeric ice-cream…

We were recommended to have a sip, have a bite and have a lick (wonderful taste sensation) 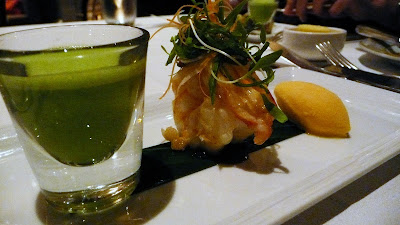 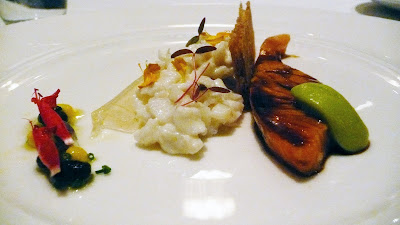 The Boy and I thought that this was the clear winner for the night… all the famous just went together magnificently and the caramel was just orgasmic! 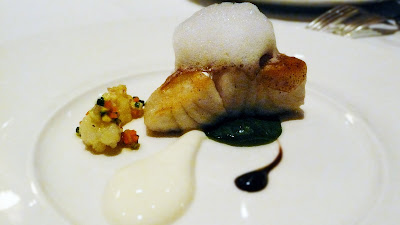 This next dish, a Pekin duck (that’s how it’s spelt on the menu), and Harvey bay scallop, peking juices, spiced marshmallow like a crepe, tempura enoki mushrooms, ginger sesame and pandan oil 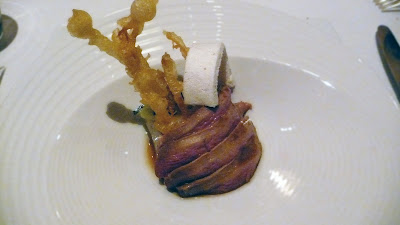 The dish that came next was another highlight for me… as it was highland venison like a warm carpaccio, horseradish mustard dressing, butternut pumpkin with honey and coriander oil

The venison was so tender and juicy at the same time.. I absolutely loved it! 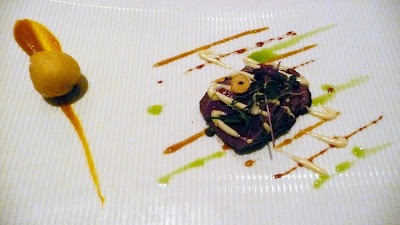 When you go to a French restaurant, and when you see suckling pig on the menu, you expect BIG things… and having had such a fantastic meal so far, my expectations were pretty high…

So when the Western plains suckling pig and tamarind, celeriac and bitter almond, dashi apple veil, dancing bonito flakes and rosella chutney salad, and cavalo nero ( a type of cabbage, Tuscan cabbage), was served up… I was expecting BIG things

And unfortunately, this was a great disappointing dish… not only did it fail to meet expectations in terms of taste… the pig was overcooked and was dry and coarse… 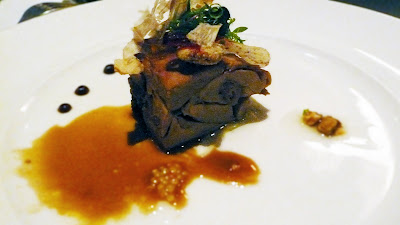 On that night, we were offered an “extra” dish to be served with our last savoury dish (the suckling pig), fresh mushrooms from Mornington Peninsula, which had just been picked, served with truffle oil and thyme (extra $25)…

Being a great lover of mushrooms and not wanting to miss out on any creations that came out of the kitchen, I gladly said yes to that…

It was a tasty dish, but wasn’t anything spectacular.. I enjoyed it more than the suckling pig (which is a travesty!) 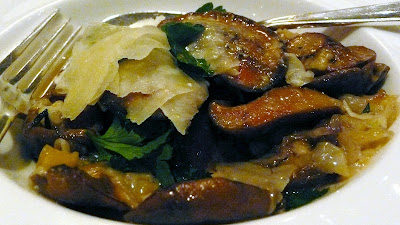 However, the night was saved with the delivery of desserts upon our humble table…

I did want to try sticking my finger to the bottom of the glass to try and get that last bit of pineapple, but I refrained… (I was civilised and used the dessert fork instead) 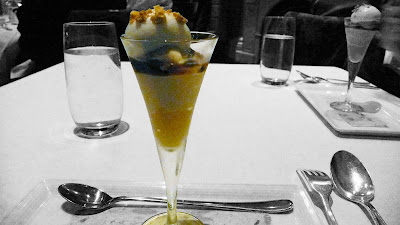 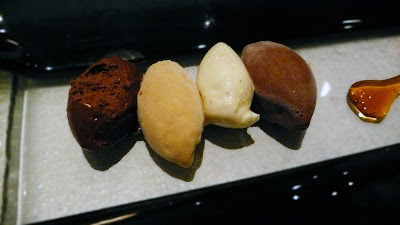 To finish off we had tea and coffee and petits fours 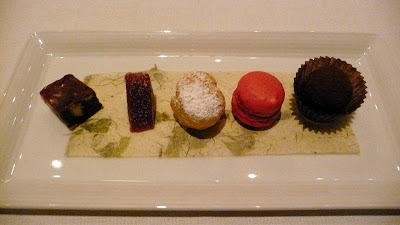 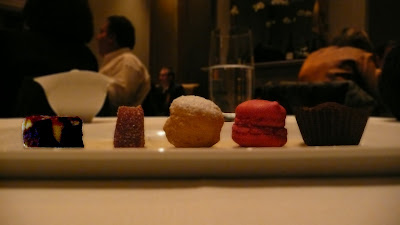 Which were, from memory, a dark chocolate truffle, macaroon, cream puff, Turkish delight and a hazelnut and chocolate (thing)… 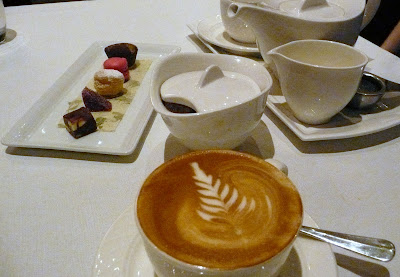 I’d like to think we had a pleasant experience here, attended by good staff and showered with fantastic food (minus that suckling pig =( )… and we had an enjoyable and romantic anniversary!

Food/ Cuisine: French (contemporary)
Dining Style: Fine dining
Overall Food Rating (Based on the Dining style): 9/10 (they lost that 1 important point due to the suckling pig)
Restaurant ambiance: 9/10 (I actually loved the idea of dining in a mansion, and we had a view of the front courtyard and watching the pattering of rain drops onto the fountain)
Service/ Attitude: 8.75/10
Value for money: 8/10 ($170 per person for an 8 course degustation and an extra $25 for the mushrooms)

Jacques Reymond is open
for Lunch from Thursday-Friday 12.00pm-1.30pm and
for Dinner from Tuesday-Saturday 6.30pm-9.30pm

Open Sunday and Monday by arrangement for functions 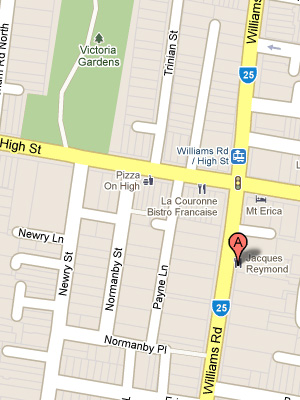